The Foster Melt Down 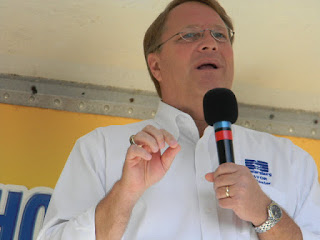 Last week was a bad week to be Bill Foster.

Sweet Bay is packing their wagons and heading out of town,. Everyone from the County Commission down is up in arms and his honor's memory apparently took leave of him forgetting the meeting where SweetBay apparently told him the store was a loser.
The lord of baseball, Bud of Selig, called St. Pete a loser, (not the first time), the band of radical Hillsborough commissioners continues to pursue his honors first love, even as  Stu Sternberg encouraged the courtship in the face of the impending doom speculated about by the Mayor and his legal team.
The threats about suing baseball are becoming less important every day as both Major League Baseball and the Rays ratchet up the pressure.
The Pinellas County Commission is also talking to the Rays. Hinting the Mayor's parochial stand may be leading to the total departure of the Rays from the area.
The Mayor had become a bit unhinged on a local radio show in a discussion about the Rays. when he said "if it was up to him the Rays just go already" Not his finest hour.
This whole baseball thing was going down the crapper faster than a $5.00 pint of suds at the Trop, oops make that a $12 pint. And that just reminded him of the whole LENs mess.
Wengay of Newton had lobbed a few SweetBay cannon balls the his honor's way, and Leslie Curran had gotten in few shots also.
To top it all off,  he had just had a tongue lashing from the  Theresa Lassiter (Mama Tee) long time advocate for her south side community. Who summed it up better than any of us writers or bloggers.
I love Mamma Tee.....
All in all not a good week for the campaign to retain his position.
If you happen to catch the video of the City Council Meltdown video in Mark Puente Times article,  watch  in the upper right of the screen as Kennedy and Gerdes as they grab their coats and think about heading for the exits. Now there are a couple of leaders for you. Run, run as fast as you can.....
The antics of last week are more what we expect from the mayor of St. Pete Beach, or Madera Beach not St. Petersburg.
As the Mayor continues to implode, more and more people are starting to pull away and take him less seriously. And that includes the staff.
The problem is Bill Foster is just not very good at running the City.  He never has been and he likely will never be very good at it. He seems to lack the maturity, temperament and leadership capacity for the job.
Have your say.  Be sure to get a petition for the Pier Referendum and complete it properly. Information and schedule of events at Stop The Lens.