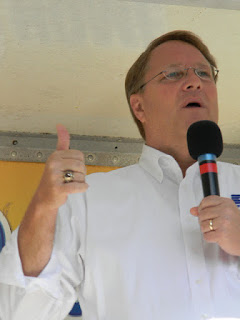 I could not believe it! I reread it three times.

There in Mark Puente's excellent Times article: Sweetbay officials say they met with St. Petersburg mayor about struggling Midtown Store, the Mayor is quoted as saying "That time period, Foster said, was just after the city buried three police officers killed in the line of duty. Foster said it is not possible for him to remember details from the thousands of meetings he holds each year."


The Mayor of one of Florida's largest Cities, invoking what has to be the darkest moment in the City's history as an excuse for not doing his job. A meeting about the very part of the City central to officer shootings and he can't remember it.
I was there. I was at the Police Department and I know that all of the people around me, those that worked with me and for me, those on the entire City staff doubled down on detail after those horrific events.
These tragic events were not an excuse to do less, they were a loud call to do more, to do better, to do all we could regardless of  our job to improve the quality of life north and south of Central Avenue.
How can it be that the Mayor cares so little for the south side and Midtown that he would forget a meeting about a key pivotal part of helping this community improve itself, let alone not take  immediate action. How can that be?
The African American community supported Bill Foster in the election because, thanks to some help from the PBA and others, they were convinced that Kathleen Ford would fire Goliath Davis and turn a blind eye toward the south side.
They were half right. Davis would have been fired, and much more quickly, but Midtown, Childs Park and the rest of South St. Pete would not have been put on ignore.
Bill Foster fired Goliath Davis and even worse did not replace him with a trustworthy competent African American voice in the administration, and has not spent much time looking South since.
It seems unimaginable that when the ownership of the center piece of  almost 10 years of effort to improve Midtown  meets with the Mayor and asks for help to keep the effort going, the Mayor would simply forget.
There was a saying that went around the organization about that time. It went like this: "If you want to get something done in this administration make it look like a baseball"
Maybe if the SweetBay folks had of changed the name to "SweetBall" and bought a banner at the Trop the Mayor would have remembered.
There is an election coming up. Let's hope you don't forget this little incident when you mark your ballot.
e-mail Doc at: dr.webb@verizon.net, or send me a Facebook Friend request.