It's Time to Vote for Saint Petersburg's Next Mayor 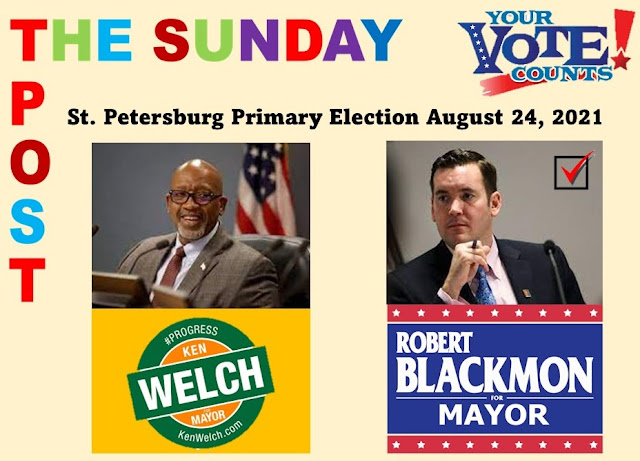 Election Day in St. Petersburg FL is drawing nearer. In fact, mail in ballots are already due.

These two candidates present a stark contrast in the direction Saint Petersburg will go.

Ken Welch, a longtime political fixture in Pinellas County, is significantly grounded in the past. Part of the issue in Saint Petersburg, has been the continuing problem of mayors who simply can't see past 34th St to the West. Welch has already indicated at least a hint of this myopic approach.

There has long been too much focus on downtown Saint Pete, and the Tampa Bay Rays, while to the West, Tyrone Mall continues to slowly disintegrate and investment to the West has been small to say the least.

Robert Blackmon is new to politics serving his first elected political office as a Saint Petersburg City Council member. Blackmon, however, brings a fresh set of eyes and a new perspective that encompasses the entirety of Saint Petersburg.

Former administrations have spent decades and literally millions of dollars trying to resolve problems in South Saint Petersburg while ignoring, in many instances, the rest of the city. Blackmon would appear to have a broader view and a wider perspective of how all Saint Petersburg can be included in the future.

The city administration could also use a little refreshing and that refreshing should be holistic and represent again all areas of the city, all ethnicities, and all people. Robert Blackmon can make that happen.

While it may not appear so, this election for Saint Pete Mayor has long range consequences for the entire city. Like all other cities, the new census data shows that Saint Petersburg is changing in its makeup. And those demographic changes need to be recognized, embraced and addressed.

Ken Welch is a career politician. He spent his entire life playing politics and there is no reason to expect that he will significantly change his approach once he's the chief operating officer of the city of Saint Petersburg. One might see Welch’s connections with the Pinellas County Commission as an asset when it comes to dealing with problems like the Tampa Bay Rays and Tropicana Field redevelopment, but others looking carefully will probably see it as more of a liability.

Blackmon brings a fresh look, significantly fewer political debts to pay, much more of a true business and management-oriented approach. Blackmon can relate to the changing demographics and the new millennial mindset that requires significant adjustment as it relates to virtually every part of the fabric of our society.

It's time to stop looking backward for leadership. It's often been said, “Doing the same thing over and over and expecting different results is the true definition of insanity.”

That may or may not be the case, but in this election, new ideas, new approaches, new concepts, and fewer entanglements and commitments should make for a better Mayor.

Whatever you do, whoever you support if you live in Saint Petersburg and are registered to vote, vote in this election.