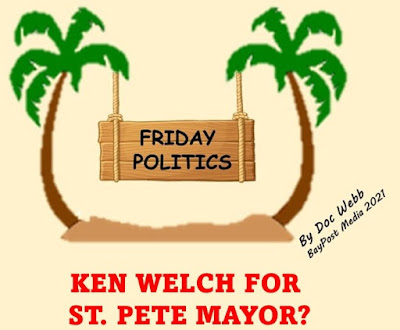 It's a little early to start drawing final conclusions regarding the Saint Petersburg mayoral race with the primary on August 24th.

The initial polling on the race shows former county commissioner Ken Welch with a decent lead over the other major candidates in the race. Welsh is currently polling at about 20% leading the nearest candidates by 8 plus percentage points.

So, it's probably time to start asking the question is Ken Welch the best candidate for Saint Pete mayor?

In fact, one of the primary efforts of Ken Welch during that time was quietly avoiding the term limit rules weakly put in place by the county Commission. Commissioner Welch always seemed to have a platitude and or response when questioned about his multiple terms.

There's a big difference between being a county commissioner and being a mayor of a city the size of Saint Petersburg. One of the legitimate questions that should be asked regarding ken's ability to serve in this capacity is whether he possesses the ability to transition from politician to chief executive officer and leader and manager of an organization of over 2000 people.

Of course, that same question can be asked of most of the candidates currently running for mayor. There isn't a well-seasoned businessperson among them.

For now, Saint Pete citizens should begin to watch closely each of the candidates who are currently vying for the mayor's job. The range is vast from little experience too much experience. As is the interest of those who are running.

The mayor's race, as are all the City Council races, are reasonably nonpartisan. But don't let that throw you. Partisan politics always manages to rear its ugly head in these races sooner or later.

For now, listen, watch, and learn, you need to be an informed voter on August 24th. The new mayor won't be elected that day, but the two people who will face off in the general election on November 2, 2021, will. You want to cast your vote so that you are sure you have a choice of two highly viable candidates.