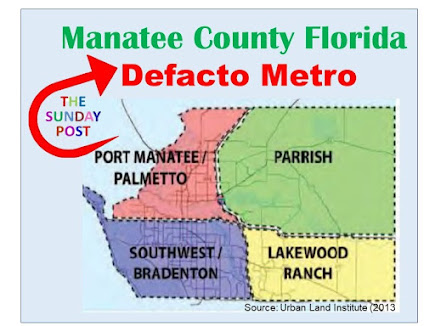 A Metro or a Metro government is formed when one or more cities, and their surrounding County merge into a unified jurisdiction. As such it has the government powers of both a Municipal Corporation and an administrative division of the state. (Definition from Wikipedia.)

For some historical information:

Here are some links to the Manatee County Planning Process:

As we approach the release of the 2020 census data, all estimates indicate that there will be significantly more people living in the unincorporated area of Manatee County than there are in the incorporated cities.

If you are new to the area or relatively new, say within the last couple of years or so, you probably get the feeling at times that you are living in the Wild West. That is especially true if you live in the unincorporated areas and in a community, that is controlled or managed buy a Homeowners Association.

You may have also noticed that some services are fragmented between County government and the Cities in Manatee County. Most notable is law enforcement.

As the County continues to grow, especially to the East, the County will find itself looking more and more like a large city with pockets of development managed my homeowners associations.

There seems to be no appetite among the cities for annexation of large or small developments as they occur, or after they are completed. It would seem that the cities in Manatee County are not interested in expanding their footprint and most particularly not interested in assuming the functional problems, infrastructure and public-safety responsibilities that go along with annexing these large developments.

If you look at the links above, you will notice that there were some significant development decisions made in the 2006 timeframe when the housing bubble burst. There were decisions made to stop preparing for development in the eastern portion of the County and wait until the economy improved, and the development became more probable to occur.

The problem is the County, through the County Commission, has not been able to develop a growth plan for infrastructure, roads and public safety as fast as they can approve development and the developers can build houses.

Since there does not seem to be an alternative with city annexation and the establishment of city responsibilities for services, the County now finds itself in an out-of-control growth mode with no workable plan to deal with the infrastructure and public-safety issues that are rapidly growing.

In fact, it would appear Manatee County is by default be coming either a large city unto itself or a Metro government that must work with not only the unincorporated population, but also with pocketed developments, the developers and the existing cities to come up with a governance plan that supports a quality of life that will continue to make the County a desirable place to live.