Can You Really Trust the University of South Florida’s Consolidation Commitments? 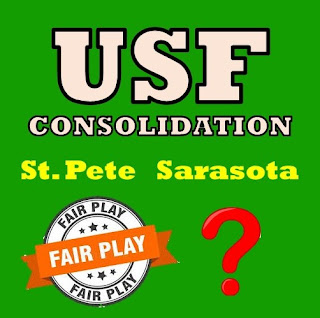 The decision to consolidate the University of South Florida’s campuses in Tampa Saint Petersburg and Sarasota seemed to come out of nowhere.

There have long been competition, disagreement and distrust between the campuses in Saint Petersburg and Sarasota and the mother ship in Tampa.

There is obviously a litany of issues related to the consolidation of multiple campuses in any university system, but the level of outright disdain for leadership in Tampa from the remote campuses has been surprising to say the least.

For some insight, check out this recent article in the Tampa Bay Times Editorial Section, On USF consolidation, don’t drop the ball now | Editorial.

The level of backbiting, drama and similarity to a soap opera among the academic faculty, the administration and the student body in all universities is legendary. And USF seems to be no exception.

According to the article cited above the number of transfer students enrolled on the Saint Pete campus dipped about 34% since last fall while the Tampa campus saw an increase.

Like everything else that's going wrong these days; USF leadership would like to blame all this on the coronavirus to deflect from what's actually going on.

In fact, the USF leadership in Tampa has been less than forthcoming about how both the Saint Petersburg and Sarasota campuses are going to fare in the consolidation.

There are academic philosophical differences, budget and finance concerns and a lack of trust as I mentioned above between all of these campuses their leadership their academic faculty and operational staffs.

The question here is can mayor Kriseman, Representative Sprowls as well as Senator Brandes really trust what the administrative leadership of the University of South Florida in Tampa are telling them?

There has been a significant effort on the part of USF leadership to put as much fog around this consolidation as is possible. It would appear that the overall objective, regardless of what the politicians may think of the consolidation of the USF campuses is all about, is a centralized concentration of power and control over budget as well as academic freedom.

Kriseman, Sprowls and Brandes is may very well find themselves caught up in the middle of an academic struggle between the campuses and their leaderships that may go on for some time.

The one thing that is certain in all of this is that the people responsible at the University of South Florida from the president down through his senior staff have only their best interests at heart. All of this talk about academic excellence, serving the students and helping the communities is just so much pretty paint on what's really going on behind the scenes.

Collegiate academic administrations have a penchant for telling you exactly what you want to hear and then doing exactly what they want.

The Senator, the House of Representatives member, and the Mayor of Saint Petersburg are going to have to stay right on top of what's going on at USF St. Pete, or they're going to end up with less than what they were promised.