Florida 2020 Ballot Referendums – What Do They Do 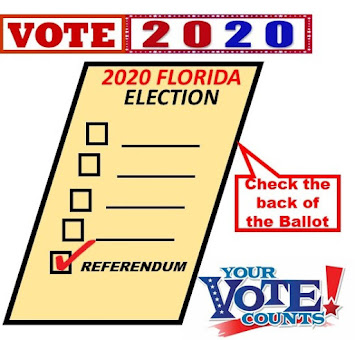 There are six statewide referendum amendments on this years' Florida ballot.

Below is each referendum by Title and a brief summary.

My comments are in italics.

Amendment 1
States in the state Constitution that only U.S. citizens who are 18 years old or older can vote in federal, state, local, or school elections.

This amendment would prohibit non US citizens from voting in federal, state, local, or school elections. Residents, holding a work visa, education visa, or work permit or any other form of documentation allowing them to be in the United States would be prohibited from voting in Florida.

A 60 percent supermajority vote is required for the approval of Amendment 1.

The Second Amendment increases the state minimum wage to $15 by 2026. This amendment is being challenged by those who claim it would cause employers to reduce the amount of hiring going forward toward the 2026 deadline. There is no empirical data that would show there is any validity to this argument.

Basically, being fought by hospitality and low-income employers, their objective is to hold down labor costs going forward.

A 60 percent supermajority is required for the approval of Amendment 2.

Amendment 3, establishes a top-two open primary system for state offices in the primary elections. What this means is in primary elections for the governor, the legislators and the Florida cabinet consisting of the attorney general, chief financial officer, and commissioner of agriculture, every registered voter could vote for any candidate. Currently, these primaries are closed by political party meaning that Democrats can vote for the Democrats, Republicans can vote for Republicans; independents can vote for the independent candidates if there are any.

Under this amendment in the primaries, the elections would be wide-open  anyone registered of any party could vote for any candidate of any party, and the top two vote getters would go onto the general election.

As more and more people prefer to register as independent voters not revealing or taking a political party, this Amendment would open up Florida’s primaries to a more reasonable rational selection of candidates for top state offices.

A 60 percent supermajority vote is required for the approval of Amendment 3.

Amendment 4
Requires voter-approved constitutional amendments to be approved by voters at a second general election.

Amendment 4 would simply require that constitutional amendments put on the ballot by citizens or legislators following the proper process, would require two votes before they became an amendment to the Florida Constitution.

In a world where things move as fast as they do today this amendment could put multiple years delay in important changes to the Florida constitution to deal with immediate concerns.

This amendment was driven significantly by the push to legalize marijuana, and the current effort related to Amendment 2 raising the Florida minimum wage. A number of people, including some very powerful politicians feel the process to generate amendments and get them placed on the ballot is now too easy to accomplish and are attempting to slow down the process with this amendment.

Amendment 4 is bad politics and bad government it really deserves your no vote.

A 60 percent supermajority vote is required for the approval of Amendment 4.

Amendment 5
Increases the period during which a person may transfer "Save Our Homes" benefits to a new homestead property from two years to three years.

Amendment 5 is a clean up amendment that helps prevent people from losing their save our homes benefits, which are essentially property tax credits if the time from the sale of an existing home to a new home takes longer than two years.

A 60 percent supermajority vote is required for the approval of Amendment 5.

Amendment 6
Allows a homestead property tax discount to be transferred to the surviving spouse of a deceased veteran.

Amendment 6 provides for the transfer of homestead property tax discount credits to the surviving spouse of a deceased veteran. Currently, those benefits are terminated following a veterans’ death.

A 60 percent supermajority vote is required for the approval of Amendment 6.

60 percent supermajority vote: A supermajority requirement is a requirement in some votes and elections where more than a simple majority of those voting must vote in favor of a proposal in order for it to be considered to have been approved.

As you can see, every vote on the referendums is extremely important.

Information above taken from Ballotpedia

On your local ballot, there may be additional referendums depending on the County and City you live in. If you have a question about a local referendum, check with the local newspaper, or major television station web site. You can find good information on GOOGLE, just put the referendum Title and County/City in the search box.

Be sure to vote for all the offices on the Ballot as well as all the referendums.