Hunzeker all wrong for Manatee County for a Host of Reasons 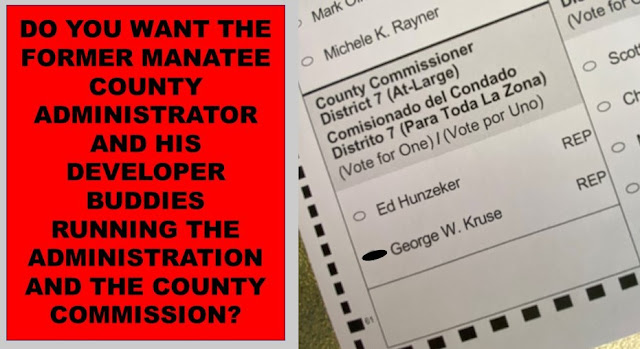 If you are a registered Republican living in Manatee County you need to read this post.

Tampa Bay, Fl
Opinion by: E. Eugene Webb PhD
Author:  In Search of Robin, So You Want to Blog.
Why is Ed Hunzeker running for Manatee County Commission?
Hunzeker’s Campaign literature indicates that he will, “Bring my proven leadership skills, knowledge of Manatee County and conservative principals to the County Commission.”
Ed Hunzeker, a Lakewood Ranch resident, served Manatee County as County Administrator from 2007 until 2019. In his retirement comments Hunzeker indicated he wanted to “spend more time with his family.”
Cheri Coryea was tapped to be the interim Manatee County Administrator in March of 2019. She has been with the County for over 30 years but did not meet the educational requirements for the position and has no governmental experience outside of Manatee County. See The Bradenton Times article by Dennis Maley: Commissioners Split on Options for County Administrator.
In what could be considered nothing less than political nepotism, and after adjusting the job requirements to suit Ms. Coryea’s current qualifications the County Commission unanimously appointed Ms. Coryea as the first woman Manatee County Administrator. See PATCH Post by Paul Scicchitano: Manatee County Names Permanent Administrator.
From the PATCH Post, "I couldn't be happier with the decision," Hunzeker said at the time. "She has witnessed how we've managed the county and she will manage with her style."
In October of 2019 Ed Hunzeker, former Manatee county administrator, announced he would run for the Manatee County Commission District 5 seat.
In April of 2020 Ed Hunzeker announced he was switching races, see FLAPOL article by Jacob Ogles: Ed Hunzeker switches races, seeks Betsy Benac’s open Manatee County Co. seat.
A possible answer to the question: why is Hunzeker running may be the fact that Coryea’s performance, especially in, managing the current pandemic crisis has been  weak, and also the big developers are getting a bit nervous as the political land scape may be shifting.
When Hunzeker switched races from the District 5 seat to the at large seat it seemed to be sending a message that his desire was to exert the maximum influence over the County Commission.
It is hard not to imagine with Hunzeker in the at large seat, the current County administrator, Cheri Coryea, will find herself in a difficult position dealing with a County Commission looking to Hunzeker for leadership and direction  and the administration staffers still loyal to Hunzeker.
Hunzeker is the guy who created most of the situation that we're experiencing in Manatee County right now.
You've probably driven down the narrow two lane roads with carve outs for new developments and dealt with the high volume traffic four way stops that dominate eastern Manatee County, and yet one of Hunzeker’s campaign plan points is developing a prioritized list of roads to be built by 2040. That is 20 years from now!
From the Bradenton Hearld by Ryan Callihan: Developer money makes early difference in Baugh vs. Hunzeker Manatee commission race.
Then there is the matter of the Lincoln park pool now nearing 10 years in the planning stage. Hunzeker has never been supportive or capable of causing this project to come to completion. The people that have been fighting for this pool for almost a decade don't need Hunzeker on the County Commission to hold up further a project long overdue.
What we need on the Manatee County Commission are fresh faces not the same old crowd from the past and also faces that are not controlled by the big developers in Manatee County.
Residents of Manatee County that are registered Republicans can nip this in the bud on August 18th in the primary election by voting for George Kruse. You can see his BIO at: George W Kruse Office: COUNTY COMMISSION - DIST. 7 - AT LRG.
E-mail Doc at mail to: dr.gwebb@yahoo.com or send me a Facebook (E. Eugene Webb) Friend request. Like or share on Facebook and follow me on TWITTER  @DOC ON THE BAY.
See Doc's Photo Gallery at Bay Post Photos.
Disclosures:
Please comment below