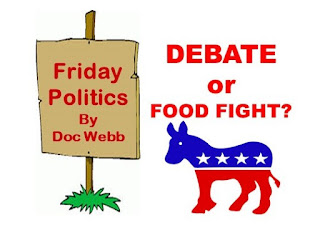 Some pundit commented right after the debate that it was more like Wrestle Mania than a political debate. I could not agree more.
First, the format was terrible. There were way too many members on the “panel” probably NBC’s attempt to prove they support everyone, but they really looked awful.
The poor guy from the Nevada Independent, Jon Ralston, barely got a shot. I’m not sure why he was there, and it looked like he didn’t know either. The on the dais NBC egos were on full display.
I don’t think these debates need a panel that whose numbers rival the number of candidates unless the idea is self-defense in case of a stage riot. The DNC calls it “diversity among the moderators," all they are really doing is allowing the networks to run in ringers.
This idea of having ethnic or “subject matter” questioners is just plain stupid. Also, whatever happened to just asking the question without a snarky tone in your voice? NBC needs to do some debate moderator counseling.
I am not sure why they say there are “rules” for these episodes of political theater. Nobody, including Lester Holt made any serious effort to reign in Warren.
For most of the night, Bloomberg looked like a deer caught in the headlights, Warren shrieked incessantly which some mistook for reinstatement of her “more aggressive campaign” I think she is just someone with little or no self-control and would be a disaster in the Whitehouse.
Sanders, obviously irritated that Bloomberg was even on the stage, hammered home his consistent talking points while painting Bloomberg as something just short of the Antichrist.
Buttigieg managed to stay calm in the storm. His bipolar description of the Bloomberg/Sander's views and the possible damage of nominating either was a sound point. Pete was the first to really get Amy Klobuchar off her game. It's been a long campaign, and it appeared to me, the workload and the stress are finally getting to Klobuchar. Klobuchar is good but not quite ready for prime time.
Biden finally got some legs under his campaign, but it is probably too little too late.
To sum it up, the format was lousy, the panel of moderators were generally terrible, Bloomberg should probably spend some of that money on a good debate coach, Warren needs to cut back of the coffee before the show, Sanders needs to smile more so socialism will seem a bit more friendly, Joe Biden is just Joe Biden, Buttigieg’s calmness is astounding at times, and Amy Klobuchar needs to take a few days off and just rest.
Everyone involved with putting on this debate from the DNC to top network brass should take a look at the results and begin to work on a format that is less a food fight and more of a delivery of issues and positions to the American public.
E-mail Doc at mail to: dr.gwebb@yahoo.com or send me a Facebook (E. Eugene Webb) Friend request. Like or share on Facebook and follow me on TWITTER  @DOC ON THE BAY.
See Doc's Photo Gallery at Bay Post Photos.
Disclosures: