Pinellas Suncoast Transit Agency (PSTA) is going bankrupt. Instead of fixing their fiscal crisis, they are seeking bailouts and new revenue sources. PSTA wants another transit tax referendum on the 2020 ballot because they are insolvent in 2022. 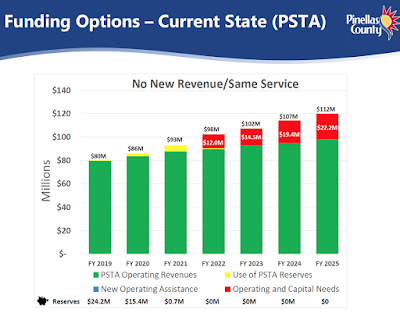 PSTA has not only been fiscally mismanaged. They have been dishonest, previously abused Federal funds, provided misleading false information to the Federal Transit Administration in their federal grant application, are using their Reserves for operating expenses and for years have refused to address their declining financial position.

Listen to our latest podcast (about 15 minutes) highlighting PSTA's fiscal mess and the end game they want - a new transit sales tax.

The Pinellas County Commissioners must vote to place another transit sals tax on the ballot. They are watching closely how the Florida Supreme Court will rule this spring on the fiasco in Hillsborough County - the All for Transportation transit tax legal challenges.

However, it appears the chess board is being lined up and preparations are being made to put another transit tax referendum on the Pinellas 2020 ballot.

The Feds even told PSTA in 2014 they could bring criminal charges against PSTA for their misuse of federal funds. But no one at PSTA was ever held accountable for abusively using Federal transit security dollars on their rail tax hike campaign.

Instead PSTA CEO Brad Miller and his staff continued to receive pay raises even as PSTA's financial position continued declining. And now the Pinellas County commissioners reappoint the person who was Chair of the PSTA Board when PSTA's misuse of federal funds occurred - during a sales tax hike campaign.

Long is up for re-election countywide this year.  She has been one of PSTA's biggest champions for their proposed $45 million Central Avenue Bus Rapid Transit (CABRT) project. PSTA's financial mess, the CABRT boondoggle and a tax hike could all become election year issues for her.

With PSTA running deficits and using their Reserves to keep operating, the misnamed CABRT boondoggle, that will not even run on Central Avenue, will quickly bankrupt PSTA - without a new funding source.

The CABRT project began as a $16 million project in 2016. It was enabled to proceed under the radar of the general public for years to become a $45 million boondoggle due to PSTA's lack of transparency.

PSTA was never straightforward about nor never clearly informed the public the CABRT project removes valuable parking and general lanes of vehicle traffic along its route from downtown St. Petersburg to St. Pete Beach.

PSTA never told the public this project requires a new transit tax and has issues with being truthful.

CEO Miller and Commissioner Long, Miller's political sidekick, travelled to DC numerous times over the last few years to lobby for tens of millions of dollars of Federal Transit Administration (FTA) funding for the CABRT transit project that speeds up bankrupting the transit agency.

Miller and Long lobbied the FTA, our Congressional representatives and our two Florida Senators for the CABRT boondoggle. In addition, PSTA uses tax dollars to hire State and Federal lobbyists to also lobby elected officials and the bureaucracies in Tallahassee and DC.

Taxpayers and residents from Pinellas County took responsibility to inform those Miller and Long lobbied to about the opposition to the CABRT, PSTA's dishonest behavior and PSTA's rapidly declining financial position.

Therefore, none of these decision makers can say they are not aware of the opposition to the CABRT, PSTA's fiscal mess or some of the shenanigans associated with the CABRT project.

PSTA is in need of reform, a new CEO and a new CFO and not a new revenue source from the wallets of taxpayers.

Taxpayers in Pinellas….Beware! Be Prepared!

Because Pinellas County appears to want to reward PSTA's lack of transparency, dishonest behavior and fiscal mismanagement with putting another transit tax referendum on the 2020 ballot.