Will Scooters Crash the Tampa Streetcar?

We stumbled upon some interesting data on Facebook recently that raises some questions in our mind about the viability of transit compared scooters.

Will scooters success crash the TECO Streetcar ridership?
Scooters were introduced around downtown Tampa in the May 2019 timeframe. There were plenty of articles in the Tampa Bay Times and other publications about the good, the bad, and the ugly with scooters.

Scooters were deployed pretty quickly by 4 companies - Bird, Lime, Jump, and Spin, and some other's including Uber are now in the mix. One cannot be around downtown or SoHo area without seeing several scooter riders, and even more scooters available outside many establishments and street corners.

Early reports about scooters dumped on sidewalks and yards have subsided, as the riders seem to have improved their scooter manners.

There are still some valid concerns about safety. One rider was killed in an accident with a truck. Scooters can run up to 20 mph. Helmets are recommended, but rarely used. The vast majority of injured scooter riders were not wearing helmets. The wheels are small, which can lead to loss of control in potholes and cracks in the roads.

A safety class was offered. But we still saw a scooter rider literally slaloming down Cleveland Street last night.

Much like driving, scooter accidents often involve alcohol and drugs.
A new study published Thursday in Trauma Surgery & Acute Care Open found that out of 103 patients treated at three trauma centers for e-scooter-related injuries, 79% were tested for alcohol and 48% of that group was found to have a blood-alcohol level of more than 0.08, which is the legal limit for drivers in most states.

It's not just alcohol that has impaired scooter users and led to injuries. Sixty percent of the 103 patients in the study were also screened for drugs, and 52% of them tested positive.
Scooters are not a safe or legal way to support over-imbibing while bar hopping.  Yes, there have been cases of DUI convictions.

Despite the risks, scooters have some key advantages for micro-mobility.

First of all, they are convenient. A scooter just for you is likely nearby. Just grab one, do the app thing, and head off, when you want, from where you are, to where you want. No waiting around for a bus or streetcar to come around, or the expense of ride-sharing for a mile or two trip.

This convenience and mobility independence is the significant value of scooters. Point to point commuting always wins out over transit.

This mobility convenience and independence is the same as with cars, which is why cars are faster and more highly utilized than transit.

It helps that the scooters are electric, so the riders effort is minimal compared to bikes. And no greenhouse gases!

They are much faster than walking, averaging around 10 mph, and up to 20 mph, so suitable for a much quicker ride compared to walking the same distance.

Scooters also appear to be a good option for the "last mile" problem with transit. Transit almost never gets to your doorstep. Covering that last mile, usually on foot, is not appealing to most. Hopping on a scooter can make it much more amenable.

How do those scooter ridership numbers compare to the other touted transit service available in downtown Tampa, the TECO Streetcar's ridership? 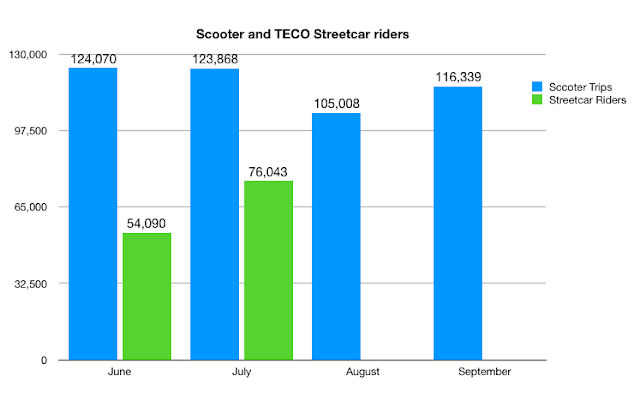 HART has only published ridership data through July 2019 as of this writing. But a quick comparison shows the number of scooter riders more than doubled the streetcar riders in the scooter's first full month!

Scooters have been averaging 117,321 rides a month since June. Clearly they tend towards short scoots averaging about a mile, but short scoots seems to be their sweet spot.

Granted it's not an exact comparison. The streetcar suffers from its limited fixed route -- it goes where it goes, which most often is not where you want to go. It goes when it wants to go, which often means waiting for the next streetcar. Watching scooters and cars go by while you wait.

But hey! The streetcar is free these days! It has increased ridership! Around double since it's been free.

But you could be there by now if you just scooted.

And the streetcar won't get you near SoHo, Grand Central, University of Tampa, Hyde Park, Julian B. Lane Park, Harbour Island, Encore!, Tampa General, among other spots around downtown Tampa anytime soon.

But a scooter can.

Scooters, led by private companies, which were deployed in weeks, with no subsidies, improves your mobility, for a fee, beats the limited and free TECO streetcar.

Of course, HART and the city of Tampa want to expand and modernize the streetcar system.
The City should a) commit to an aggressive implementation of the existing plan to modernize the streetcar by increasing capacity and speed to extend into Tampa Heights, b) begin planning for the extension beyond Tampa Heights (Phase 4), and c) work with HART to develop a long term funding approach for streetcar system operations, focusing on maintaining high quality levels of service and free and/or reduced fares.
Below is a peek at their plans as they are today. While the streetcar route is extended, it will still suffer from the limitations of the fixed route that mostly goes where you are not going. 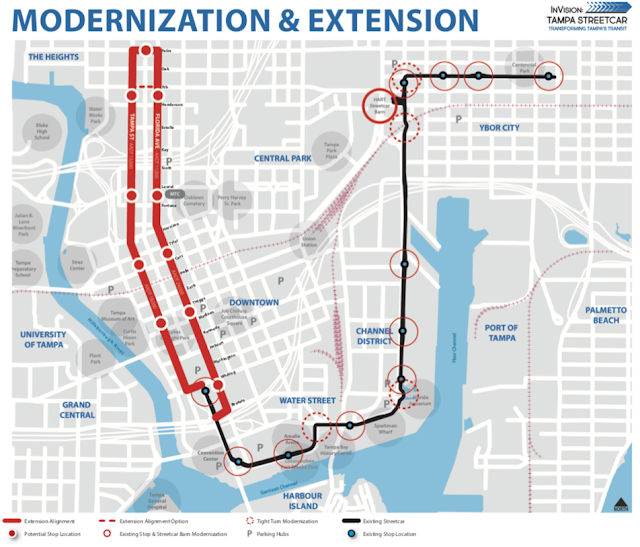 So far, the cost estimates are lowballed at around $170 million (2017 dollars) for a 1.3 mile extension and modernization of the existing route so it is more receptive to modern light rail cars. The quaintness of the streetcar will be no more. Not much has been completed beyond some planning studies. Ridership estimates, if they exist, have not be released. Don't be surprised if it's a huge expense (the highly touted Phoenix light rail extension is now costing over $200 million per mile) which likely will not be free.

The conceptual plans call for the streetcar modernization and construction to begin 2021 and operational in 2024.

Did I mention that the scooter companies had their mobility solution deployed in weeks, at no cost to the taxpayers, and immediately had double the ridership as the streetcar?

Not to mention the new route extension plans call for exclusive transit lanes for most of the Tampa Street and all of the Florida Avenue route. These roads are the primary ingress and egress to downtown from the north side, so expect traffic congestion to increase due to these routes.

Will raising scooter rates reduce the number of scooter trips? No surprise if it does. Just like paying for the streetcar depressed its ridership compared to its current free rides. Here's hoping free ridership on the modernized streetcar is not extended further as another subsidy to downtown Tampa.

Perhaps it's a bit early to assume scooters will cannibilize streetcar ridership. It may coexist nicely and help with the last mile problem.

But no one is asking these questions that we are aware of.

Think about that before your politicians spend your money.