Pay for athletes. What about all students getting on the payroll? 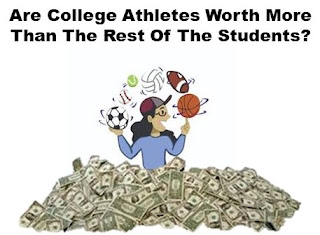 Tampa Bay, Fl
Opinion by: E. Eugene Webb PhD
Author: In Search of Robin, So You Want to Blog.
The recent efforts to allow college football players to receive compensation for the use of their image and likeness brings up a number of important questions.
Most important to me at least, is why just football players or athletes for that matter?
What about all the rest of the athletes? The tennis players, the golfers, the basketball, players the field and track runners, the squash players, the soccer players and the list goes on and on. And what about the cheerleaders should they have the ability to earn a few bucks from their images.
Then there are all the other students on the campus that would probably like to have an opportunity to cash in on their presence at the University.
What about the student researcher, the student biology major, the student medical major, the student business major, and again the list goes on and on.
Shouldn’t these students also have the ability to take advantage of their presence at the University?
All of this seems just a little bit biased to me, and it makes a lot more sense if instead of the governor promoting the football players primarily or the athletes in general that we took a look at the whole university because everybody there, for the most part, is contributing something to something and their image may be just as valuable.
How about the really handsome guy or what about the really lovely girl who would like to model or use his or her image for some revenue opportunity?
It just seems to me that it would be appropriate for all members of the student body should to be able to use their image and likeness for whatever purpose they desire.
All of this looks like just another effort by universities to figure out some way to get their fingers into the pie.
One of the things Governor DeSantis needs to be extremely careful about in the development of this program, regardless of whether or not it includes anybody besides the golden boys on the football field, is the fact that state universities should not be allowed to reduce football scholarships, to increase tuitions or be allowed to share in any of this revenue directly.
A lot of people think this whole idea of the student athletes being allowed to derive revenue and income from their opportunity to play football on Florida state college campuses and probably private college campuses as well is a slippery slope.
I agree.
Anytime you start letting large amounts of money filter and float around a university campus the one thing you can be sure of is the only person who’s not going to benefit from all that money is probably the student athlete.
By the time the managers, promoters, representatives, marketing people, advertising agencies, the college the football team, and everybody else takes their cut these kids are going to be lucky if there’s enough left to go to Starbucks for a coffee.
I do think this program is a good idea I just think that before we dash right out and focus or center of the thing on student athletes, we need to take a look at the whole campus look at the amount of money that’s being piled up in debt by the students for student loans and maybe this is an opportunity to begin to have a serious effect on that.
Oh, by the way, if all this goes into place again the governor needs to slap an absolute limit on tuition at state universities, in fact, I think it’s time that it was rolled back and rolled back significantly.
The golden age of education and millions of borrowed dollars floating around on these college campuses needs to come to an end.
E-mail Doc at mail to: dr.gwebb@yahoo.com or send me a Facebook (E. Eugene Webb) Friend request. Like or share on Facebook and follow me on TWITTER  @DOC ON THE BAY.
See Doc's Photo Gallery at Bay Post Photos.
Disclosures: