PSTA: over half of fleet is “life expired,” ridership drops further, and more

The agenda for PSTA’s October board meeting was packed with costly surprises for the taxpayers. There was a half million dollar cost overrun that went undetected for three years, the revelation that 56% of PSTA’s buses are “life expired,” and also an “unexpected” expenditure in the amount of $554,000 for the proposed Central Avenue BRT project. 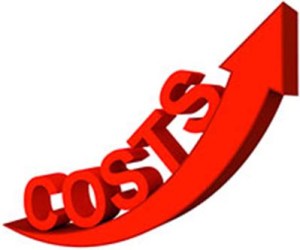 The board meeting  first dealt with a $489,670 cost overrun involving refurbished bus engines. The mistake was not discovered by PSTA staff for three years.

No details were provided about the who and the why before the board unanimously approved a contract amendment.
Despite this retroactive spending increase of 45% for money already spent, PSTA currently has zero refurbished bus engines in stock.
The PSTA board then approved $9.7 million to purchase new trolleys, which are mainly used along the beach and on the Central Avenue Trolley (CAT).

During the discussion of the trolley expenditure, PSTA Finance Director Debbie Leous stated that “as of today, we have 118 vehicles in our fleet that are life expired based on mileage,” this according to a standard used by the Federal Transit Administration (FTA).

PSTA has a fleet of 210 vehicles, which means that 56% of its fleet vehicles are currently “life expired.” 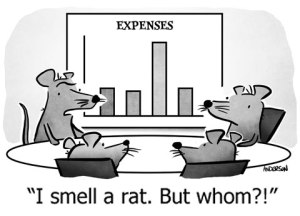 Under questioning from Pinellas county commissioner Dave Eggers, Dayal stated that no money had been budgeted for these items at the beginning of the project.
“So this is another unexpected expense,” Eggers said. However, Eggers voted to approve the spending.

The estimated cost of the CABRT project is now approximately $45 million, almost three times as much as the $16.5 million amount that PSTA CEO Brad Miller told the FTA in March of 2016 letter. Miller wrote in that letter (page 4):
“The Central Avenue BRT project’s capital costs are estimated at $16.5 million ($1.4 million per mile), assuming 5 articulated buses and 25 stations. Capital costs also include right-of-way improvements and ticket vending machines.”
Those right-of-way improvements are the very expenses that PSTA then proceeded to not budget for, according to Dayal. The question is whether the expenses were “unexpected” after all.

If completed, the CABRT will not make money for PSTA. Instead, it will cost PSTA $3 – $5 million per year and speed up its insolvency.
PSTA will spend $132.5 million in its current fiscal year, a 30.3% increase over the previous fiscal year, and a 65% increase over the year before that.  Immediately below, see a relevant excerpt from the current PSTA budget showing these numbers. 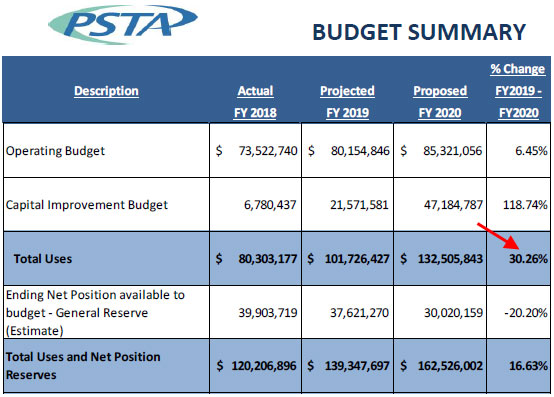 Apart from the size of its spending, there are other things that are increasing at PSTA: salaries and fringe benefits. These have increased 14.9% and 23.1% respectively in the last two years. There have been reports of insolvency at PSTA since 2014 by various news outlets, reports that continue to this day.

Adding to PSTA’s woes was ridership data provided at the board meeting showing that PSTA’s full-year paid ridership (“Bus Revenue Passenger Trips”) for fiscal year 2019 is the lowest it has been in 11 years. PSTA CEO Brad Miller did not comment on the dismal numbers, even though they were on the agenda.

All PSTA board members are politicians or politically appointed insiders, and none of them commented or asked questions about PSTA’s declining paid ridership. PSTA is projecting lower farebox revenue for this fiscal year than last, and that farebox revenue will only cover 7.6% of its spending.  Almost all of the rest of PSTA’s spending, well over 90%, is paid for by taxpayers.

The Guardian has published 26 articles about PSTA over the last 3+ years documenting failed strategies, wildly incorrect past projections, plunging ridership and much more. It seems we will have occasion to write many more.
With over 90% of PSTA’s expenses paid by taxpayers and not customers, weak and feeble board, runaway expense and declining income, is PSTA essentially a poorly functioning communist enterprise? 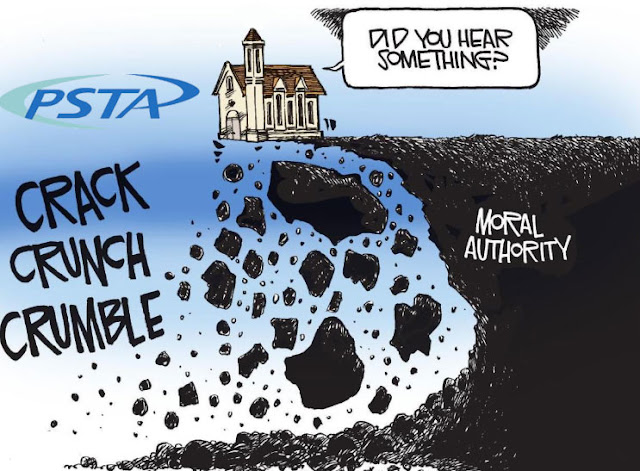