St. Petersburg has had more pedestrians killed this year than homicides. This troubling trend is also reflected in national statistics: 2018 saw the highest number of pedestrians and bicyclists killed in the United States since 1990. While encouraging more walkers and bikers is commendable and creates a more sustainable transportation system, their safety is paramount. This is a community issue more than a law enforcement issue, and better safety will require more vigilance by drivers, walkers and bikers alike.
The subheading is "It will take a combination of urban planning, enforcement and driver awareness to reverse the trend."

Is that really the full story?

The Times editorial obfuscates the data, making comparisons between pedestrian deaths, homicides (they never quote any numbers, as if homicides have any relation to pedestrian deaths), and national statistics. And that's just in the opening statement.

There is a lot of data available at the National Highway Traffic Safety Administration available in the Fatality Analysis Reporting System (FARS), incorporating national and local traffic fatalities, including St. Petersburg. FARS provides information on the times of day, locations of accidents, the ages of the victims, the factors contributing to the accidents and much more. FARS also provides ways to query the data to drill down into the locales and metrics of interest, such as pedestrian fatalities. FARS queries and some FARS static data were used to perform further analysis discussed below. We will focus on St. Petersburg, since that was the subject of the Times editorial.

First of all, the data does appear to confirm an increase in pedestrian deaths. 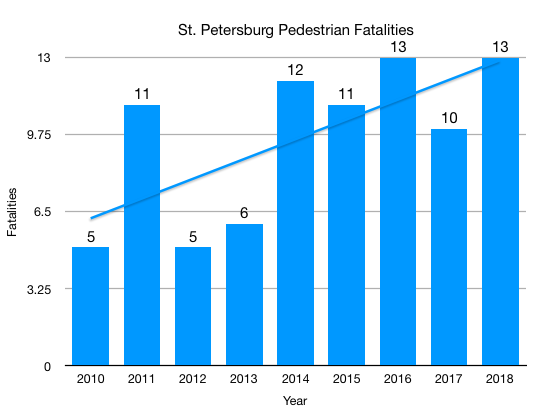 Clearly there has been an increasing trend in pedestrian fatalities in St. Petersburg since 2010. 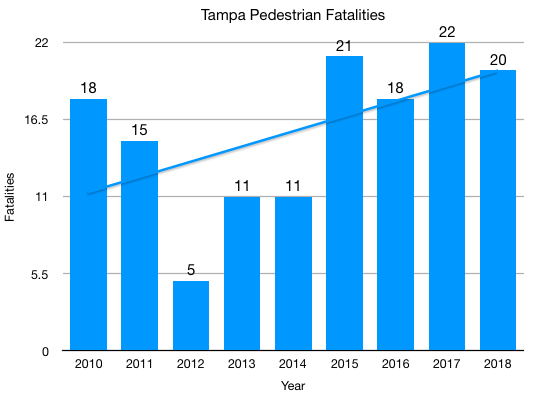 For comparison with St. Petersburg, Tampa also has an increasing trend of pedestrian fatalities. 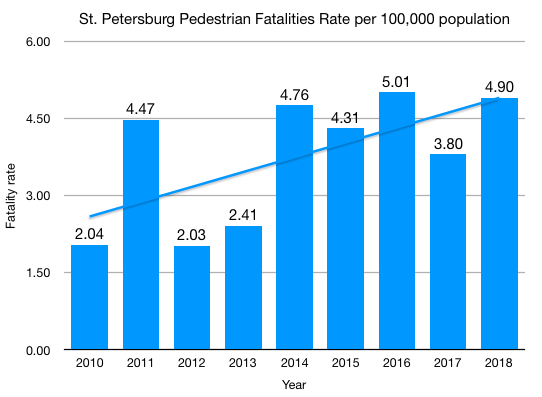 The Times does have a point here. The data does confirm a troubling increase in pedestrian deaths.

However, there are some interesting details in the data the Times did not cover to try to understand this trend. 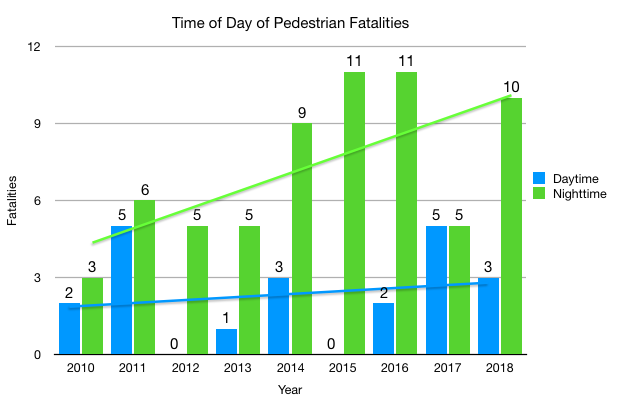 Since 2010, 72% of fatalities occurred away from intersections. This suggests a majority of pedestrian deaths were not near crosswalks. 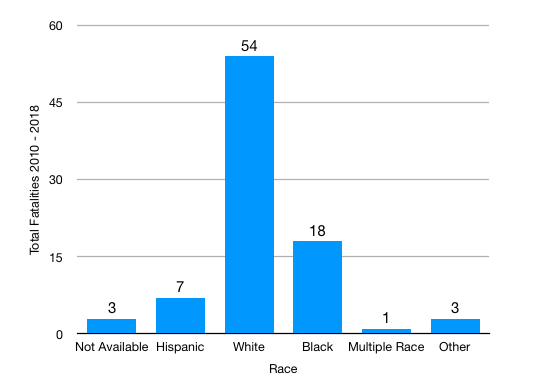 FARS reports the factors that were involved in the accident such as “failure to obey traffic signs” or “traveling on prohibited trafficways.” These are factors that relate to the pedestrians, not the vehicle drivers. While FARS also reports on factors relating to drivers, it does so for all accidents, not breaking out pedestrian accidents. There may be multiple factors associated with an accident.

Clearly "In roadway improperly", "Not visible", "Improper crossing", "Darting or running into road", and other factors are associated with pedestrians, not drivers. This suggests pedestrians share at least some fault for a substantial portion of these accidents.
Peeling back the data provides some additional insights beyond the Times editorial.

Pedestrian deaths are more likely to occur away from intersections than at intersections. This suggests jaywalking is related to increased risk of fatality.

Pedestrian deaths are more likely to occur at night. This suggests poor visibility at night is a contributing factor.

Given the demographics of the victims, pedestrian fatalities in St. Petersburg do not appear to have any racial disparity compared to the entirety of St. Petersburg.

While I want to avoid blaming the victims, and not all the FARS data captures drivers behaviors, pedestrian death related factors suggest that in many cases their actions are contributing to the accidents.

If we are to continue to promote walking and biking and want to reduce the fatalities, the data suggests improving pedestrian's awareness of their risks, the proper understanding of rights of way, increasing the use of helmets for cyclists (and scooters), wearing bright and/or reflective clothing at night, engaging drivers with eye contact before crossing roads, and safely navigating in traffic must be part of the solution.

Everyone of these deaths, and all traffic deaths, are tragedies. No one can argue against the goal of death reduction with programs such as Vision Zero, which has been adopted by St. Petersburg, Tampa, and other municipalities in Florida. However, the FARS data suggest some additional activities should be prioritized towards the goal of Vision Zero.

The Times and other activists have been on a kick the last several years promoting transit, bike, walking, and complete streets at the expense of automobiles. While there has been some increase in pedestrian, and small increase in bicyclists participation, transit use has decreased, while people still prefer to drive. This is promoting a deadly mix of bicyclists, pedestrians, and cars on arterials and surface streets. Complete streets further condense this mix through increasing automobile congestion for the benefit of the pedestrians and cyclists, increasing the odds of collisions. Any auto vs. pedestrian or bicyclist accident is too often a deadly outcome for the pedestrian or cyclist. A few more miles of complete streets around St. Petersburg won't make a dent in this tragedy, and in some cases nationally, have been shown to make it worse.

This also should include enforcement for pedestrians as well as drivers. Too many jaywalkers results in too many pedestrian deaths. Bicyclists ignoring traffic laws and riding against traffic is another risky activity. Nationally and statewide, and most certainly locally, many pedestrians under the influence are killed. The pedestrian victims demographics closely matches St. Petersburg's demographics. Stronger enforcement should not be sidelined by concerns from the "biking while black"scandal in Tampa a few years ago.

After all, if Vision Zero can't use all available tools for safety and fatality reduction, for pedestrians and cyclists as well as drivers, then St. Petersburg and other municipalities in Tampa Bay adopting Vision Zero are not serious.

It will take much more than "a combination of urban planning, enforcement and driver awareness to reverse the trend" if the Times and urbanists really care about saving lives.