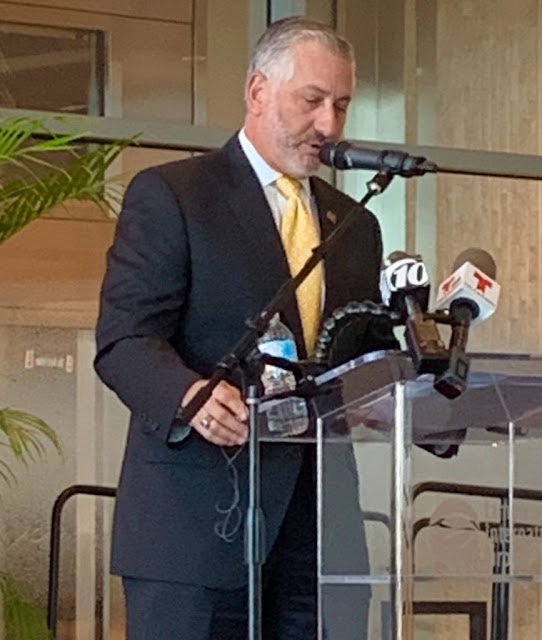 By Jim Bleyer
St. Petersburg mayor Rick Kriseman is a man with ambitions that could reach as far as the Florida Governor Mansion or the U.S. Capitol building.
The whispers by insiders on both sides of Tampa Bay are screaming “Governor.”  Kriseman and his team, however, can assess the political landscape at the end of his second term in 2021, a year before both Gov. Ron DeSantis and Sen. Marco Rubio will be up for re-election.
The only other name floated on the Democratic side as a potential challenger for the governor is Andrew Gillum, the former Tallahassee mayor who came up 35,000 votes short against DeSantis in 2018.
Kriseman, donning a finely-tailored suit and sporting perfectly-groomed facial hair, on Thursday addressed the Tampa Bay Mobility Alliance as keynote speaker.  The audience of about 125 included most key transit advocates in Pinellas, Hillsborough and Pasco counties who for 20 years have relentlessly promoted the spending of billions of tax dollars for regional mass transit.
He didn’t waste any time playing to the crowd and reviewing his accomplishments in the transit realm.
Kriseman kneecapped Florida Sen. Rick Scott, excoriating him for not accepting billions in federal funds for high speed rail that would connect Tampa Bay, Orlando, and Miami.
“It’s surreal that a politician would have turned down funding that would have solved the state’s transportation woes,” Kriseman asserted without mentioning Scott by name.  The spend-at-any-cost pro-transit crowd lapped it up. 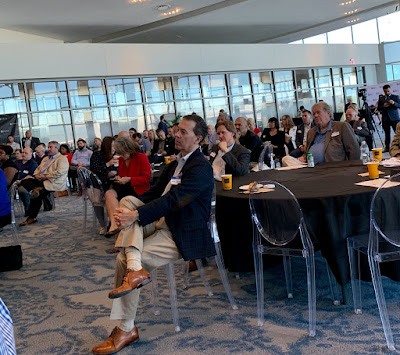 High-speed rail has boosted connectivity in other countries, especially China, he noted, adding that such service would mean a 45-minute commute between St. Petersburg and Disney World.
Lauding the Cross-Bay Ferry, Kriseman said that the service should become a permanent fixture.  He made sure to mention that St. Petersburg has done due diligence on e-scooters in order to avoid the safety, liability, and clutter issues that are plaguing other cities.  The mayor spotlighted his city’s bus rapid transit system as a good example of what can be accomplished on the local level.
After the 90-minute session concluded, Tampa Bay Beat asked Kriseman about his future political plans.  The mayor adhered to the template universally employed by every politician thirsting for higher office.
”I’ve got two more years as mayor of St. Petersburg and we’ve got important issues facing the city,” Kriseman smiled. “I’m not thinking beyond that.”
He didn’t call the chorus of whispers “ridiculous,” or dismiss them out of hand.
When 2022 rolls around, Kriseman will have had 8 years overseeing the fifth most populous city in Florida. He also served three terms in the Florida House from 2006-2012 and was a member of the St. Petersburg City Council from 2000 to 2006.
There are two factors that will weigh heavily on the mayor’s decision—and any other Democrat infected with the bug to run statewide: how Florida votes in the 2020 election and their party’s much ballyhooed effort to register one million new voters by 2020.