A Tale of Two Cities and Sea-Level Rise - Tampa

Tampa Bay, Fl
Opinion by: E. Eugene Webb PhD
Author: In Search of Robin, So You Want to Blog. 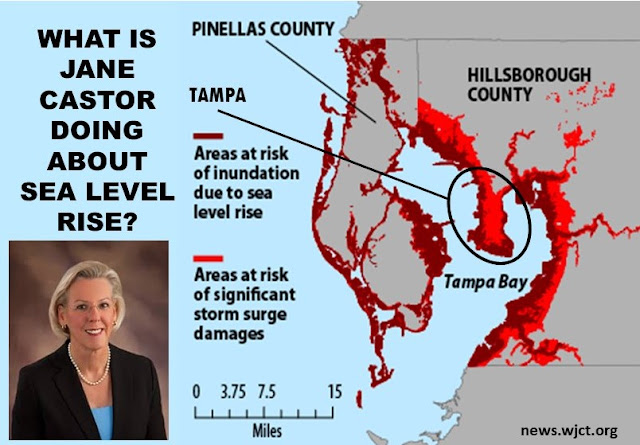 I wrap up my sea-level rise series for now with a look at two bay area cities and their view and approach to sea-level rise. Now a look at Tampa
You can get some additional information in this Post from Florida Politics (FLPOL) By Janelle Irwin Taylor: Jane Castor wants Tampa to go 100% clean energy by 2045.
You can see more from Mayor Castor’s campaign Sustainability and Resilience Plan by clicking this link.
Here is the Section dealing with Sea-Level rise:
“Tackling Stormwater Management and Sea Level Rise – While the City has
taken meaningful steps to increase stormwater funding, many projects
remain in the pipeline. As Mayor, I will work with City Council to prioritize
funding for stormwater upgrades. I also recognize that flooding and sea
level rise threaten many properties in Tampa. Our new City of Tampa
Climate Action and Resilience Plan will address the impacts of sea level rise
and recommend solutions for coastal resilience, such as the
implementation of living shorelines and utilizing green infrastructure where
appropriate.”


If you scroll down to page 35 of the Budget presentation you get to the Section on “Sustainability and Resilience for Tampa’s Future.” What follows are five pages of what is essentially Climate-change political jargon.
Castor would establish an “Office of Sustainability” which will simply produce more reports, hire more consultants and next year everything will be pretty much the same except; high tide flooding will be worse in Tampa’s low-lying areas.
Here again, climate change works as a campaign banner but the reality of sea-level rise and its effect on the City of Tampa practically and financially has no mention by the Mayor.
In less than two decades the map in the graphic above will begin to become a serious reality. If Castor could accomplish her goal of reducing Tampa’s Carbon footprint as she states, there is every reason to believe that the sea level in 10 years will be exactly as it would have been without that effort.
The massive impact of low-lying property flooding and the subsequent reduction in property value and ad valorem tax revenue on Tampa’s economy and the City’s financial viability should be the number-one focus of this office of sustainability and a principal concern of the Mayor.
Granted, it won’t happen on her watch, but the failure to accept the fact and plan for the effects of the sea-level rise could well define Mayor Castor’s legacy.
Castor needs to be careful to not be misled by developers wanting to build seawalls and consultants proposing massive public works plans to hold back the waters of Tampa Bay with dams and dykes for two very simple reasons. 1)They are way to expensive to build and maintain even with help from the federal government and 2) they simply will not work in the long run.
Castor needs to step up and make sure her administration is not just investing in things that look good on a campaign flyer while the sea level continues to rise.
The Mayor should immediately begin to develop and fund an effort to acquire low lying property, demolish the structures and replace them with green space.
Governor DeSantis has already set aside state funds to help in this effort, and Tampa should take a lead in lobbying for more state and federal funds for low lying property acquisition.
Castor also needs the courage to stop all development in areas defined as sea level endangered immediately. It is political dangerous and could well cost her re election but stopping the continued development and redevelopment of endangered land is an absolute necessity.
Castor like all other mayors of coastal communities needs to stop being influenced by the climate-change rhetoric of renewable energy and carbon footprint and start looking into the reality of how they will deal with a slow rising disaster that will wreck her City’s economy and bankrupt Tampa's government.
Let the power companies worry about renewable energy, and if you really want to deal with the carbon footprint, replace every 5th parking meter with a charging station and let economics solve the carbon footprint problem.
E-mail Doc at mail to: dr.gwebb@yahoo.com or send me a Facebook (E. Eugene Webb) Friend request. Like or share on Facebook and follow me on TWITTER  @DOC ON THE BAY.
See Doc's Photo Gallery at Bay Post Photos.
Disclosures: