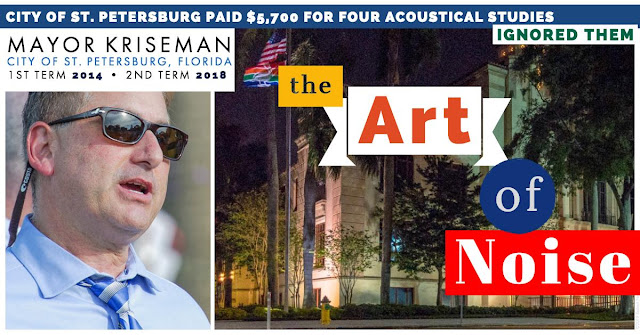 Area residents should be concerned and ask both Mayor Kriseman and City Council for clarification on exactly how the noise ordinance applies, what distance applies to the venue per the noise ordinance, exactly what is allowed under the special "Outdoor Performing Arts Venue", and how complaints and enforcement will be addressed AND RESOLVED. Especially if the outdoor performing arts center impacts nearby residential areas, because:

(1) The City has not clarified which noise ordinance paragraph and subparagraph applies. The City and Police need to be up front with nearby residents. In the past, City Legal, Police Legal and Police's guidance has not been clear, and the police officers enforcing the noise ordinance.

From October 2015 to February 2016, City and Police Legal generated a total three emails and letters for police, residents and businesses. They each stated the minimum distance from the bar to the residence — 1000'. While my residence was beyond that distance, the residents across the street from the business' outdoor music were not so lucky. They were too close. However, the police responding never cited the Flamingo Resort. They stated the noise was not “Plainly audible,” yet; the noise was plainly audible to senior citizens who were standing next to or near the police officer.

Legal also stated the police officers could deem the noise to be inadvertent. The Joint City and Police Legal email to me stated, the officer can ask the business to turn down the music. The police never cited the Flamingo Resort, just kept asking them to turn down the noise or gave them stern comments.

The police have no means to track police "warnings" for noise. This is public information that must be posted on the city web site. This is another item Council Members need to ensure is in place.

(2) City Police have a history of not enforcing the noise ordinance and not issuing citations. For residents trying to read the noise ordinance, the language can be confusion and ambiguous. Even when provided direction from City and or Police Legal Advisors, the officers ignored the letter's guidance on the distance. Sec. 11-53. - Loud, raucous and unnecessary noises enumerated covers the distance and times in subparagraphs


I have encountered police officers who ignored the Legal's emails and letters, and refused to look at them. Two officers promised to contact legal and get back. Never did. One stated the distance was 3000', and another said the distance was 5000'. The City Legal and Police Legal email stated 1000'.

So be prepared for City Legal, Police Legal, and Police Supervision and officers to keep changing the distance.

(3) The proposed noise ordinance revision is not changing because Option 3 Decibel Standard was not selected. Plainly audible will continue to be the standard.  Every neighborhood board and its residents need to read this to understand how new businesses or venues with performance venues' noise may impact them.

The Warehouse Arts District is located within District 7. Council Member Lisa Wheeler-Bowman represents the area bounded by District 8 and Council Member Amy Foster. The two Council Members should take the lead to reach out to area neighborhoods and residents to ensure they understand exactly what the special permit states for the outdoor performing arts venues.

Council Members Wheeler-Bowman and Foster, and area residents should be concerned, because:

1. "The proposed property is three blocks from the nearest residentially zoned property..." Whoever made that statement does not understand how noise works, and is an empty promise. The City should require sound monitoring at the property perimeter and at the three-block mark for both the types of decibel readings, dBA and dBC.  A-weighted discriminates against bass but C-weighted meter measures the low frequency, commonly referred to as bass. What is the difference between "A weighting" and "C weighting"?

Residents near Skyway Marina District have reported noise from the Flamingo Resort at 2000' and four blocks. In Nashville, noise at outdoor amphitheater was heard a mile away.

2. Residents should not trust a business when the resident faces a loss of enjoyment of their home.

If the business does not engage an acoustical engineer, how can they demonstrate that they working with the City and community to understand how their business model will impact the area?

Because the City did not select Option Decibel Standard, where the noise level can be measured by a decibel meter, the selected noise ordinance uses the current standard "Plainly audible." This noise ordinance definition is the issue and has two main clauses.


Plainly audible means any sound produced by a source, which can be heard by any reasonable person of ordinary sensibilities using his or her unaided hearing faculties.


While the officer will be in uniform, their hearing is anything but uniform.

The officer is there for a minute or very short time. Listening for a minute may seem OK to them, but you may have to listen to this over your television for hours and hours. Or you may not be able to sleep!


Words or phrases need not be discernible and low frequency sound reverberations are included.

Low frequency or bass is the least understood and not likely to be enforced. While police officers listen for audible, but they will more than likely state the bass is OK. Because police officers are not trained on how bass works, this is not well understand.

If you are inside your home, that police officer outside may say the bass is "OK" to them. But your walls may be vibrating, windows shaking, or have a thumping pulse inside all afternoon and night. Residents, who are two doors down, may not experience the bass or thumping. Neighbors across the street can be blocked by another building, and not be affected.

Many residents in this City have tried to work with bars or venues but the efforts were in vain. Some residents have been labeled to be the problem because they keep calling. Bar have filed civil lawsuits against several residents.

The current and proposed noise ordinance will not be a resident's friend. Instead, it will be the business' best friend! The business and supporters (and neighbors) may ask you to move. How neighborly of them!

District 6 and 8 residents need to work with their respective Council Members, and request the business applicant provide an acoustical noise study that WILL be reviewed by the City’s acoustic consultant.

Yet, the City WILL NOT pay for a medical expert to study the noise's impact on resident's health for both adults and kids.


How can the City ask a business to promise… when the noise ordinance is based on “plainly audible?” Police Chief Holloway does not offer training on noise?

One resident at the Detroit had multiple calls to report the noise at The Landing at Jannus. Police confirmed the walls were vibrating. However, the police researched the noise ordinance and found there is a minimum distance. The  resident lived too close. The decibel standard would have found this to be in violation.


How can the city even think about how the noise will impact residents when the City has not hired a medical expert to educate them on noise’s impact on adult and kids’ health. City must run this application by a nationally recognized noise expert.

But at least District 6 residents seem to be in better hands than I was. They should not expect their Council Member to work with the police and bar owner to develop a strategy to deal with them, like City Council Member Kornell did with me. (Jack Dougherty is the Flamingo Resort owner and President of the Board for the Skyway Marina District. Officer Kelly was the Community Service Officer.) There are five Police Reports for noise that should concern District 6 residents.

The City's plainly audible standard applied to these calls, where police did not issue a citation. While the calls before midnight on weekends were in compliance with the noise ordinance, the residents should have waited until after midnight to call. Then the noise would be in violation, but only if the police officer found it to be plainly audible.

All report "Location of the incident" are the Flamingo Resort, located in the Skyway Marina District, and are included at the end of the article.

None of these calls were made by me.

1:15 AM - Call For Service Report 2009302184 - Noise Nuisance - Flamingo Resort
Kelly says COMPL needs to be seen to show officers noise problem.. Or we should cancel these calls. The Caller left their name but Kelly said is was Resident Refused.

11-24 PM - Call For Service Report 2011086987 - Noise Nuisance - Flamingo Resort
LOUD MUSIC COMING FROM THIS X20 KEEPING CMPL AWAKE. DENNIS C. KELLY on terminal: $131B SPOKE WITH THE COMPLAIANT WHO ADVISED THE MUSIC WAS NO LONGER LOUD AND THAT SHE WAS GOING TO SLEEP. Spoke with Front Desk Manager who they are having a pink party and that he will turn down the music.

1:02 AM - Call For Service Report 2016088386 - Noise Nuisance - Flamingo Resort
2000' away. For last hour been listening I have been trying to sleep. New to area. Is this the whole deal. Spent last hour reading through the noise ordinance and they are in violation.

11-22 PM - Call For Service Report 2016153144 - Noise Nuisance - Flamingo Resort
There were multiple calls after 1 AM
Called twice, once at 6, once after 9. Noise is back up.  I just want to go to bed. COMPLAINTANT IS 4 blocks away. CONCERT WILL BE STARTING FROM MIDNIGHT UNTIL APPROXIMATELY 0130 HRS. MUSIC WAS NOT IN VIOLATION 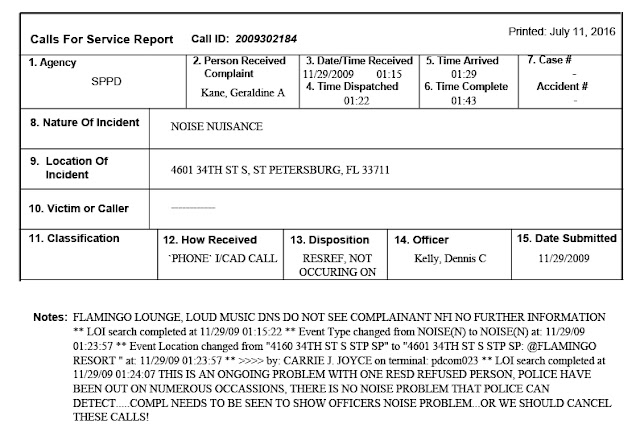 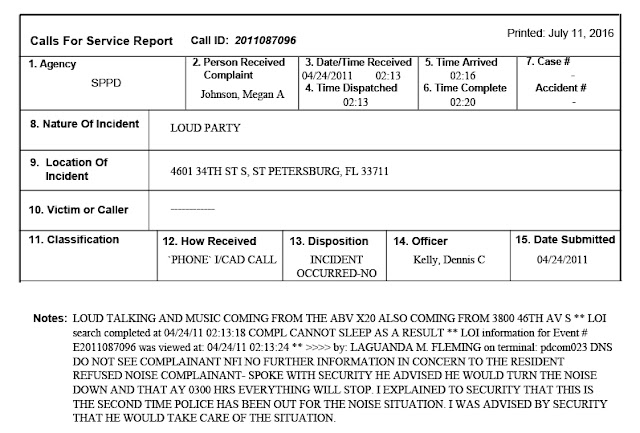 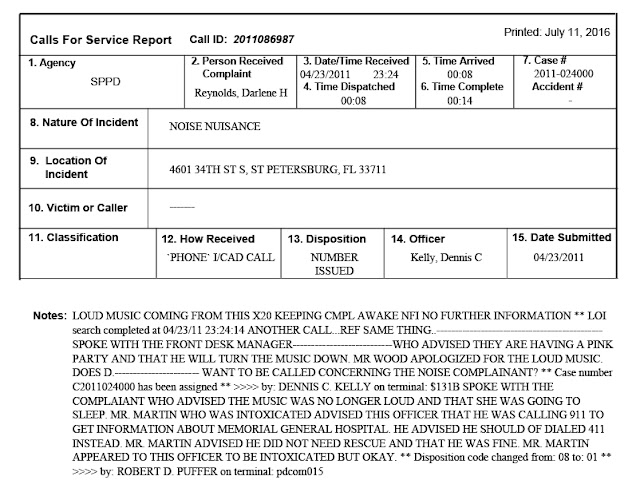 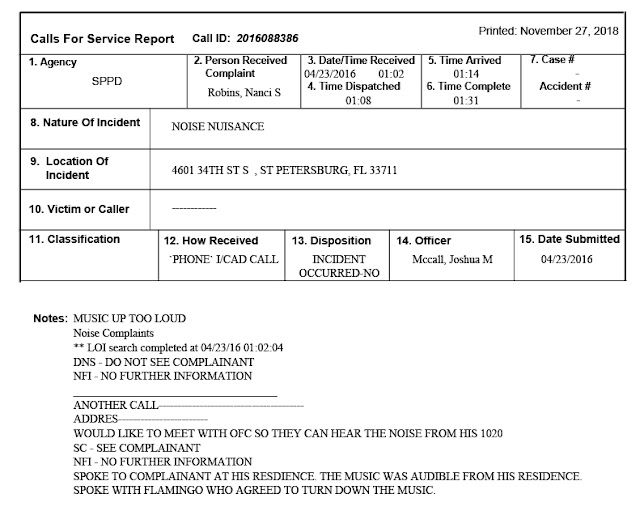 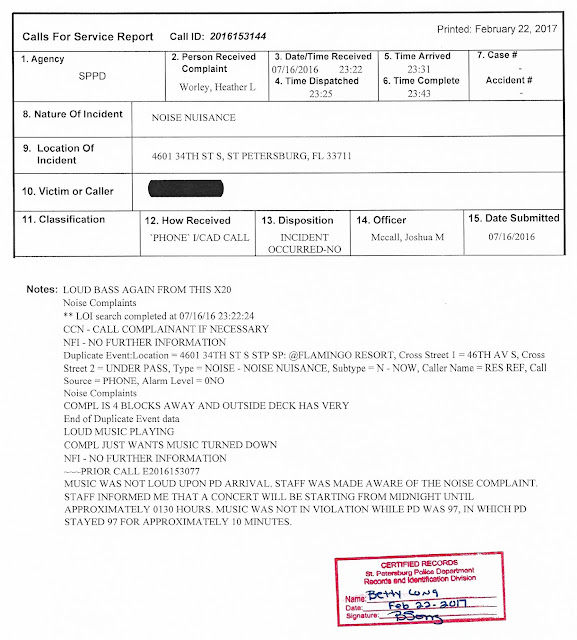 The Brady Bunch - Will the Bucs Win?

Tampa Bay, Fl Opinion by: E. Eugene Webb PhD Author:   In Search of Robin   So You Want to Blog . The long awaited mu...