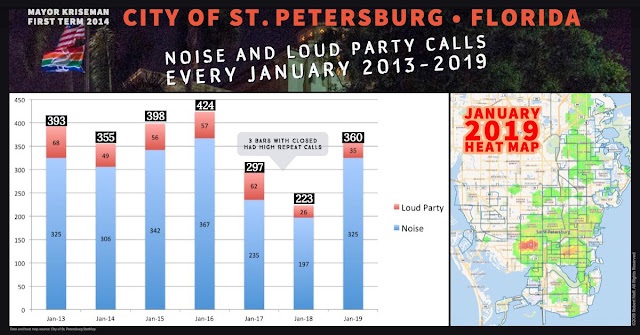 January 2019 noise calls have increased, and have returned to 2016 levels. Mayor Kriseman may want to have Planning and Zoning run the data to figure out where the noise increase is, and how many citations were issued. Then share this with residents and bars, because 2019 is on track to be the noisiest year since 2016 with estimated 3,900 calls.

January comparison for noise and loud calls from 2013-2018 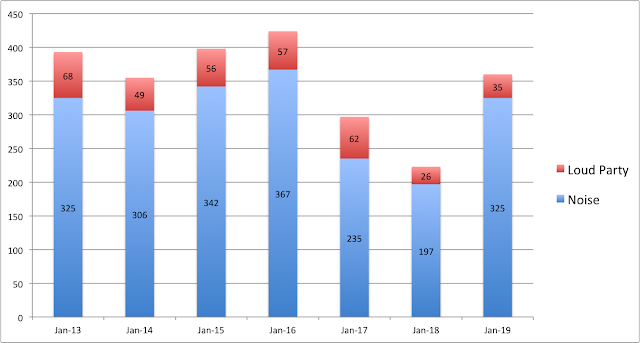 
Chief, just to follow up on our conversation this morning, while there is a revised noise ordinance in the works, I need your officers to begin enforcing the existing ordinance now. Specifically, if they were to engage in an intense operation over the period of a few weeks, and announce that this operation would be forthcoming, it could have a deterrent effect going forward and would go a long way to making the public feel like the City was engaged in this issue.

Some of the locations where we are receiving the greatest number of complaints 34th are Tryst, Caddy’s, the Landings at Janis, and the Flamingo on Street.

If you can get your officers to buy into the fact that their actions in enforcing this ordinance (just like the vehicles parking in the street or on lawns) impacts quality of life and fits in with the broken window theory, they’ll do a better job with enforcement and not give you the same amount of pushback.

Did anyone tell the Mayor that his order the Police Chief didn't work?

Mayor Kriseman has been asked to hire a medical expert to educate Council, City, and Police AND to assess noise's medical impact on resident’s health, but he has refused. Both Noise Ordinance Project Directors Goodwin and Abernethy also declined. Abernethy stated, the noise ordinance is not changing, just the fines.


This is the lamest excuse for not having a medical expert review the acoustic noise studies, and to both present to and educate PS&I, Police and the City.

From May 2017 to April 2018, the City paid for four acoustical studies. Total cost was $5,700, yet the City will not pay for a medical expert to study the noise's impact on resident's health for both adults and kids.

The City has ignored the acoustical expert and the studies, and chosen to not use the decibel standard. Yet, the Mayor Kriseman and City Council can quickly vote to ban plastic straws and protect the environment.


Wish Mayor Kriseman and City Council were just as concerned about our health as they were with the environment!

The Noise Ordinance will continue to use the plainly audible standard, which helps bars and harms residents.

The revision does not change the minimum distance. As the downtown and areas outside downtown become more dense, this will create a bigger problem for residences.

If you live across the street from a bar, the police cannot enforce the noise ordinance. This has already occurred when a resident at the Detroit called the police for noise at the The Landing at Jannus.

The police have no training on noise ordinance or noise. Nor do the police have a system in place to manage the proposed warnings when they are issued.

To date, Mayor Kriseman and City Council, and Police Chief Holloway have not addressed how the warnings will be tracked and measured. This should be posted to the web site for all to see. This is called transparency.

Mayor Kriseman and City Council are making a grave mistake by refusing to have a nationally recognized medical expert on noise present to PS&I. The medical expert can educate the City Council, Mayor, Police, bar owners, and residents on how noise impacts adults and kids' health.

The noise ordinance was last revised with a cosmetic change to point speakers inward and close doors. Mayor Kriseman and City Council need to stop kicking the can down the road and  make an informed decision to protect resident’s health and hire a medical expert!

Here are Noise Ordinance's next steps. 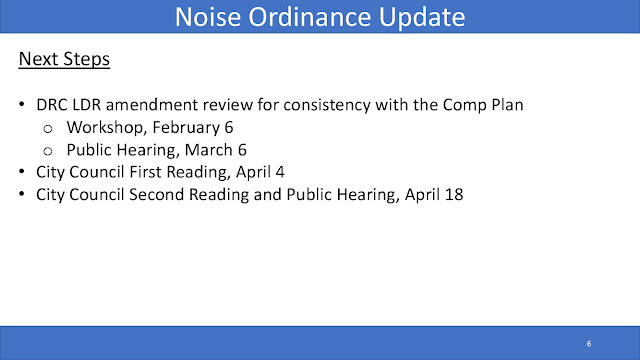 Data Source for both the chart and heat map is StatMap.