Florida is the big winner in the Mid-Term Elections. 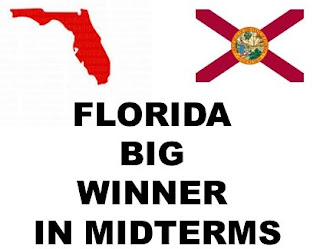 For now, the problem will be keeping DeSantis focused on Florida and not on Trump and the 2020 presidential nomination process.

St. Petersburg, Fl
Opinion by: E. Eugene Webb PhD
Author: In Search of Robin, So You Want to Blog.
The voters of Florida turned out in record numbers for the mid-term elections. While Florida is a divided state as indicated by the close elections for Senate, Governor and the Florida Legislature common sense seemed to have prevailed, and the state will not move toward a liberal, “progressive” governance.
If Rick Scott’s lead holds up in the recount, Florida will finally have some representation in the Senate that is not beholding to everyone who waves a campaign dollar in his face. It will take Scott some time to make the transition from a big fish in a small pond to a little fish in the polluted waters of Washington politics. Scott’s work ethic and his ability to be politically independent should serve Florida well, just as it did in his two terms a governor.
While Ron DeSantis, whom I supported, is a bit of an unknown as a political and administrative leader, we can expect there will not be a sea change in how Florida does business, at least not in the near term.
Most telling will be the role DeSantis assigns to Jeanette Nunez, his Lieutenant Governor. Nunez is no stranger to politics, she is a healthcare businesswoman and Republican member of the Florida House of Representatives. If DeSantis brings her in and begins assigning key roles and responsibilities to her, it will be an early signal that he is looking at a potential shot at the vice presidency in 2020.
In the Legislature, it looks like DeSantis will have some strong support, and I would expect his approach to the Legislature should be a bit more collegiate than Rick Scott’s.
Look for DeSanctis to make a strong first rush at the environmental issues he outlined is his campaign platform. See my post Ron DeSantis on the Environment. Will the Legislature follow?
Florida dodged a bullet this election. A radical shift to the left led by a progressive socialist with questionable background would have been devastating for our state. And George Soros got exactly what he deserved for buying Gillum the nomination – a loss.
The political topology of Florida is changing much in line with what we are seeing nationally. In four years if the Democrats can nominate someone who is not being investigated for corruption and has Andrew Gillum’s charisma you might just start to see the state turn blue.
For now, the problem will be keeping DeSantis focused on Florida and not on Trump and the 2020 presidential nomination process.
E-mail Doc at mail to: dr.gwebb@yahoo.com or send me a Facebook (E. Eugene Webb) Friend request. Like or share on Facebook and follow me on TWITTER  @DOC ON THE BAY.
See Doc's Photo Gallery at Bay Post Photos.
Disclosures:
Contributor to: Rick Scott for US Senate , Ron DeSantis for Florida Governor