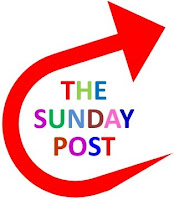 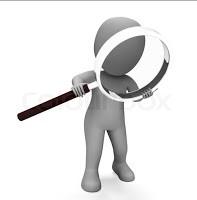 That is not how the $16 Billion rail tax hike charter amendment policy passed Tuesday was created.

We remember how FDOT's TBX interstate expansion plan was stopped. The StopTBX urbanists group felt that FDOT was ignoring them. StopTBXers were outraged that FDOT was dictating a plan that was not acknowledging their concerns.

Ironically, the StopTBX urbanists did not have the same outrage about All for Transportation's $16 Billion rail tax hike charter amendment having no community engagement. Ensuring diverse stakeholders have input to a costly major transportation plan must only apply to them.

At Tampa Bay Business Journal's Business of Transportation event held a couple of weeks ago, All for Transportation spokesperson Christina Barker admitted the tax hike was written by a few people over drinks.

The already written tax hike plan was sold to wealthy special interests and downtown developers, who will benefit, to bankroll getting it on the ballot.

There was no deliberative process regarding a $16 Billion tax hike. There were no public hearings and there was no community engagement. There was no outreach to diverse stakeholders as evidenced by the NAACP who said they were never engaged. They came out opposing the tax hike.

All for Transportation had "their" tax hike plan and that was it - no compromises allowed!

The result is Hillsborough County has a 30 year transportation policy dictating how $16 Billion will be spent that went through a $4 million marketing campaign blitz to voters. It was vetted by no one.

All for Transportation conducted a marketing campaign so dishonest that we did not find the word "tax" on any of the 13 glossy mailers we have they dumped in voters mailboxes everyday.

Instead, All for Transportation deceptively called their tax hike a "plan" to reduce congestion and accidents without ever mentioning that it was a 1% tax hike that raises the county sales tax rate by 14%. They cited no evidence that their $16 Billion tax plan would reduce traffic congestion.

Local media refused to scrutinize the tax hike. They were too busy cheer leading for the tax hike and giving All for Transportation free earned media attention.

The transportation sales surtax is governed by Florida Statute 212.055 that governs discretionary sales surtaxes. The statute, referenced throughout the 5 pages of the charter amendment rail tax referendum, states:

Section 1 of 212.055 is titled CHARTER COUNTY AND REGIONAL TRANSPORTATION SYSTEM SURTAX and provides governance for the transportation sales surtax.

Section (d) states:
(d) Proceeds from the surtax shall be applied to as many or as few of the uses enumerated below in whatever combination the county commission deems appropriate
Hillsborough County is a Charter county governed by a Home Rule Charter
so is the county charter synonymous to county commission in this statute? Legal minds can answer that.

But All for Transportation put the tax hike on the ballot as a charter amendment to totally bypass your duly elected officials. The intentions of the 5 pages in the charter amendment was not only to get the tax hike passed. It was to take away decision making powers of your county commissioners regarding how new billions of a countywide tax will be spent on transportation for 30 long years.

All for Transportation gleefully advertised that your duly electeds would not have their fingers in the tax hike's cookie jar. They touted that your electeds are not the decision makers for where the new billions would be spent. 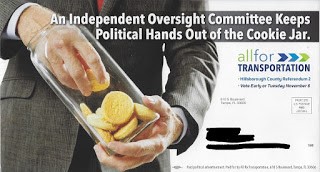 All for Transportation's $16 Billion tax hike ties the hands of future county commission decision making regarding transportation for three decades.

But they also intentionally tied the hands of taxpayers because there is no ability to change anything without going through another charter amendment referendum.

Their touted Independent Oversight Committee of unelected appointees are accountable to no one. They can only oversee that funds are spent in the allocated spending percentages dictated in the tax hike. They can't change anything.

If this 30 year tax hike does little to nothing to reduce traffic congestion as All for Transportation claimed in their glossy mailers, creates congestion havoc with 450 miles of road diets and bike paths no one uses, and becomes a transit fiscal failure, the only recourse is repealing it through another charter amendment.

But when the 30 year tax hike gets front loaded with debt to pay for the huge upfront capital costs of rail projects, the tax hike can probably never be repealed.

All for Transportation intended it that way. The intent of their 5 pages of regulations was to make it as difficult as possible to ever change "their" plan. Thirty years is a very long time to prohibit making changes.

In addition, HART, Hillsborough County's transit agency, has its own governance Charter under Florida Statute 163.567 as a sovereign special taxing district. HART has its own appointed Board, including two gubernatorial appointees.

Florida statute 212.055 section 2 of the section (d) we referenced above states:
Remitted by the governing body of the county to an expressway, transit, or transportation authority created by law to be used, at the discretion of such authority….
The charter amendment mandates handing HART at least $7-8 Billion of the total $16 Billion or more that will be raised from the tax hike over 30 years. Th tax hike dictates how those funds must be used.

HART is mandated to spend at least 35% of the $7-8 Billion they get (which is over $2.6 Billion) on costly trains/transit. HART has no discretion and they have no ability to reallocate any of the transit restricted funds. Transit restricted funding is absurdly recession proofed and locked in for 30 years no matter what.

The $7-8 Billion for HART is in addition to the ad valorem property tax assessment that taxpayers in all of Hillsborough County currently pay for except Plant City residents.

This charter amendment tax hike did not swap out the property tax assessment for the massive sales tax hike.

Taxpayers in unincorporated, city of Tampa and city of Temple Terrace are now being double dipped by HART. But Plant City residents are not.

All for Transportation apparently did not care about double dipping taxpayers because they included nothing in their charter amendment to address it.

With the billions being infused into HART, we are sure that an analysis done by HART would confirm they no longer need the ad valorem property tax.

In the interests of both fairness and HART no longer needing the ad valorem tax revenues, the HART Board should immediately reduce HART's ad valorem millage rate to zero so no property taxes are collected.

This massive tax hike was sold on "fairness" to everyone in the county so the HART Board must  ensure that does occur.

The Hillsborough MPO's current 2045 planning is now a moot point. Their 2045 plan is now set and their long range planning locked in for the next 30 years. The decision making powers of the MPO Board for how these new billions of taxpayer funds will be spent for 30 years has been taken away.

The hands of the MPO Board, that consists of county and municipal electeds, HART, the airport, the port authority and the expressway authority, are tied for 30 years. This Board cannot change the mandated spending allocations dictated in the charter amendment no matter what.

How will the MPO be able to do any future scenario planning?

Hillsborough MPO will be stuck in the past. Pasco and Pinellas should not get stuck there too. Another great reason to not regionalize the MPO by merging Pasco, Pinellas and Hillsborough into one MPO.

The $16 Billion charter amendment tax hike was a power grab by the All for Transportation downtown crowd of transit advocates to usurp decision making powers of duly elected county commissioners and HART, a sovereign transit agency.

Public policy pushed rammed through multi-million marketing campaigns rather than made through careful and inclusive deliberation is risky business that can result in unintended consequence.

All for Transportation's 30 year massive rail tax and all their lofty claims of reducing traffic congestion in Hillsborough County was not created by any governing entity.

And the little secret All for Transportation did not reveal, is that no one can be held accountable for any failures of "their" plan.

Because there is no one to hold accountable.

Posted by Sharon Calvert at 2:18 PM