In the ballot summary language that will be on the ballot in November, they deceptively included as the very first item the massive tax would be spent on as "improve roads and bridges". The transit advocates then used 5 pages of big government regulations to specifically PROHIBIT and LIMIT using the Vinik tax hike BiLLIONS for new roads and adding new lane capacity for cars and vehicles FOR 30 YEARS.

How many Hillsborough County voters who signed the Vinik massive 30 year tax hike petition to raise the overall sales tax rate to 8% - the HIGHEST in the state - were told the fine print details?

How many voters in unincorporated Hillsborough, especially fast growing South County, were told that the BILLIONS raised by Vinik's massive 30 year tax hike put strict limitations and prohibitions on its use for new roads and adding much need lane capacity in their part of the county?

The Vinik massive tax hike petition language - that would be added to the Hillsborough County Charter for 30 years if passed - specifically states: (8) Limits on New Automobile Lane Capacity.

That is simply not true. The massive Vinik tax hike is not a one-cent tax hike but a 14% tax hike that increases the county's sales tax revenues 100% over 30 years.

Yet the transit advocates who wrote the 5 pages of big government regulations gobbly gook provided ZERO dedicated money from the 14% Vinik tax hike Billions for new roads and new lane capacity for automobiles.


There's a reason why the transit advocates who wrote the 5 pages of big government regulations did so.

Below is the FORCED spending of the Vinik massive 14% transit tax hike over its 30 years. 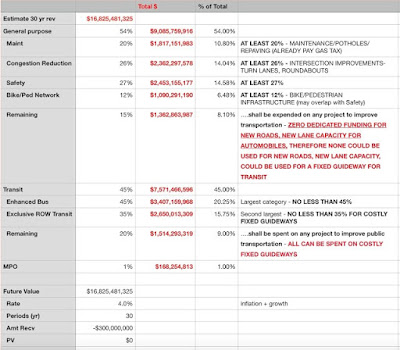 The Vinik tax hike FORCES taxpayers in unincorporated Hillsborough to pay BILLIONS for costly transit in Tampa while PROHIBITING and LIMITING the use of the tax hike they are paying to be used for much needed added road capacity in unincorporated.

The transit advocates who wrote the forced spending regulations added a new transportation bureaucracy they would control. They specifically enabled it to be stacked by Vinik and his downtown Tampa allies.

Innovation and technology are disrupting transportation and traditional transit. But the transit advocates who wrote the tax hike big government regulations do not want any changes to their forced spending plan for 30 years. Their heavy handed regulations includes restrictive Reallocation of Expenditure Categories language.

That language requires a 75% super super majority - by that stacked newly created transportation bureaucracy - to change any mandated expenditure allocations - for 30 years. And the transit advocates will only allow an expenditure allocation change to be made in the Maintenance, Congestion Reduction and Safety General Purpose (road) categories.

The transit advocates, of course, provided NO provision for changing the transit expenditure allocations. NO LESS THAN $2.65 BILLION MUST be spent for Tampa fixed guideways/rail no matter what - no matter how much waste or unnecessary spending or failure occurs.

But Vinik and his behind schedule Under Water Street development will greatly benefit….

Vinik's "All for Transportation" tax hike is a massive unnecessary tax hike written by transit advocates to constrain and restrict new road capacity in growing Hillsborough County for 30 years. It is a total misnomer.

Instead it is the "All for Transit" massive 30 year tax hike scam on county taxpayers.

Vinik's "All for Transit" massive tax hike will create gridlock in Hillsborough County.

Vote No in November!

Posted by Sharon Calvert at 1:49 PM