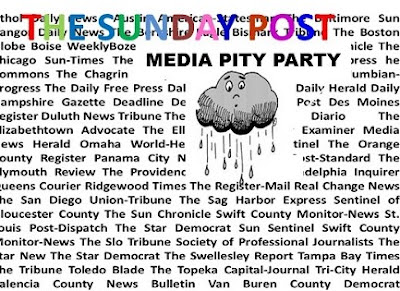 It’s the old Harry Truman adage, "If you can’t stand the heat get the hell out of the kitchen."

St. Petersburg, Fl
Opinion by: E. Eugene Webb PhD
Author: In Search of Robin, So You Want to Blog.
This week some 200 newspapers around the country all printed editorials about how bad they are being treated by everyone from Trump down to the public. All the time they were claiming their independence, value to democracy and their really hurt feelings.
It seemed to me to be the gasp of an industry on the verge of extinction.
I don’t consider myself to be part of the mainstream media, and they as a general rule they don’t consider independent bloggers as much above dirt. I don’t “report” on anything; you won’t see any “breaking news" here, and you won’t find me in a line screaming obnoxious questions at some public figure.
For the first time in modern history, the mainstream media is faced with a president who is not impressed with their efforts, coward by their persistence or particularly interested in what they say. And he is not afraid to swing back when they attack.
It’s the old Harry Truman adage, "If you can’t stand the heat get the hell out of the kitchen."
To me, the mainstream medias biggest mistake with Trump has been they have allowed him to lure the media into the gutter where many of them belong.
Since the media are frequently loose with the facts, Trump and an ever-increasing number of political and public figures feel free to do the same.
One thing I think the media may be missing, although some have seemed surprised, is the reaction from the public. They would like to blame the public’s negative and sometimes hostile reaction on “those awful Trump supporters” but the fact is the print and electronic media credibility has been slowly slipping into the toilet over a number of years.
I think it is a bit laughable that 200 major newspapers thought it was wise to dedicate their editorial page to an attack they claim is the result of one man’s effort.
The recent print media cries about their protection of our democracy are self-serving at best as they take every possible opportunity to tear down the very institutions that they claim to love with rudeness, bias, and self-interest.
If it were true that the media are the real bastions of our democracy, the I would offer we are in a great deal more trouble than we think.
E-mail Doc at mail to: dr.gwebb@yahoo.com or send me a Facebook (E. Eugene Webb) Friend request. Like or share on Facebook and follow me on TWITTER  @DOC ON THE BAY.
See Doc's Photo Gallery at Bay Post Photos.
Disclosures:
Contributor to: Rick Scott for Senate