The smack down in Singapore


Viewing the Trump/Jong-un Summit through the wrong lens. 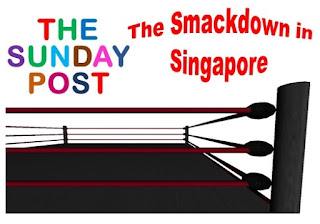 St. Petersburg, Fl
Opinion by: E. Eugene Webb PhD
Author: In Search of Robin, So You Want to Blog.
The Media scream questions at Trump as he walks across the White House lawn. Correspondents flip and flop as positions changed, the vanes in Wolf Blitzer’s head stands out as he hyper switches from the Muller investigation to North Korean Summit.
The media is completely out of control as quickly as they try to nail down a corner Trump or one of his associates rips it up.
The problem with the summit is all, and I mean all the media are viewing it through the wrong lens.
Trump needs to add one more person to his team. It is his long-time friend Vince McMahon Chairman and CEO of World Wrestling Entertainment.
Take a step back and consider all that has happened in the last six weeks as you look at it through the lens of a WWE Monday night spectacular- The Smackdown in Singapore.
Need some help? Think of Trump as Nature Boy Ric Flair and Kim Jong-un as Hiroki Sui.
Consider the plot: Rouge Nation versus the Greatest nation on earth.
Two super egos.
The exotic and sinister back drop of Singapore. Trump’s Right-hand man Pompeo making a secret visit to North Korea and then Kim’s right-hand man Kim Yong Chol   a long US hater comes to Washington.
Only the WWE guys could write this stuff.
It’s game on. The stadium in Singapore is full to the rafters.
Television screens all over the world are tuned in as the lights go out and that most famous of all sports voices Michael Buffer says, “Are you ready…... to rummmmble?"
The lights come on and there in the middle of, an enormous ring is a 60-foot conference table.
To the right a 100-foot-high wall in glistening silver and gold in the middle a magnificent American flag flanked by the largest American Eagle ever seen.
Buffer’s voice resonates through the hall and explodes your subwoofer…, “Representing the United states of America…The leader of the Republican Party, the Commander and Chief of the United States Military and President of the United States Doooonald Trump!”
The spotlight focuses in on the center of the US Flag and after a dramatic pause President, Trump steps through the Curtin adorned in a sequined American flag robe with Ostrich plums and flowered neck wrap, with a golden quaff of hair, dark suit and blue tie. Following the President his interpreters and adviser's.  Trump proceeds slowly to the ring climbing the stairs to the apron where he pauses raising a triumphant hand – the crowd goes crazy!
To the left a 100-foot-high wall red draped in scarlet from top to bottom in the center North Korean Flag flanked by two intercontinental ballistic missiles and a mysterious gold box.
Buffer’s voice rises to a crescendo…, “Representing the State of North Korea the son of Kim Jong-il former North Korean Chairman, the current Leader of the Democratic People’s Republic of North Korea, Chairman of the Worker’s Party of Korea, and Chairman of the Korean Central Military…… Kim-Jong uuuuuuum.
The lights dim; a brilliant spot light hits the Center of the North Korean Flag, the curtains part slowly as three North Korean Military Generals step through the Curtin, followed a few steps behind by the North Korean leader Kim Jong-un. In a stunning move immediately behind Kim is North Korean President Moon Jae-in. The crowd gasps.
Kim is dressed in a flowing robe and traditional Korean double-breasted suit, his hair dark black glistens in the bright light rivaling the styling of Trump’s. Kim proceeds about half way to the gigantic ring where he pauses and lifts both hands the crowd erupts in applause.
Kim climbs to the ring apron. His military attaches split the ropes, and he enters the Ring removing his robe to thunderous applause. He pauses at the back of his chair.
Trump nods to Kim as his attendees split the ropes to again thunderous applause. Trump removes his robe, tosses it to the crowd and moves toward the back of his chair. The supporting members of the negotiating teams move to their respective chairs as the lights dim.
Immediately there is the playing of the Korean National anthem, followed by the American National Anthem.
The entire center goes suddenly and completely dark for a few seconds then just as suddenly the ring, and the conference table are ablaze in light.
The sparing begins.
E-mail Doc at mail to: dr.gwebb@yahoo.com or send me a Facebook (E. Eugene Webb) Friend request. Like or share on Facebook and follow me on TWITTER  @DOC ON THE BAY.
See Doc's Photo Gallery at Bay Post Photos.
Disclosures:
Contributor to: Rick Scott for Senate
Please comment below