St. Pete water bills going up, and they will continue to do so 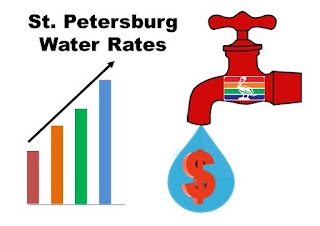 While you may not like the rate increase, you have to give Mayor Kriseman and his administration some credit for taking the problem head on.

St. Petersburg, Fl
Opinion by: E. Eugene Webb PhD
Author: In Search of Robin, So You Want to Blog.
After a couple of frustrating years and a big judgement related to the St. Petersburg Wastewater and Storm Water systems the financial impact of years of infrastructure neglect is coming home to roost.
You can get the detail from: Caitlin Johnson, Tampa Bay Times: St. Petersburg residents will see higher water, sanitation bills.
The City’s consultant indicates the average increase is about 7%, which means if you live in St. Pete and use 4,000 gallons a month in potable and reclaimed drinking water your bill will go up about $10.96.
The typical method of funding water infrastructure has been with deficit financing using utility bonds. According to the Johnson article the City funded 10% and used bonds to cover the remaining 90% with a portion of utility revenue dedicated to pay off the bonds. A very expensive way to build infrastructure.
The City will now fund 50% up front reducing the amount raised from the bonds and saving significant amounts on interest charges.
All of this puts the City in sounder financial position, but the impact of the change flows directly to the customer. The prediction is rates will rise about 10% each year over the next five years.
While you may not like the rate increase and the long-term prognosis, you have to give Mayor Kriseman and his administration some credit for taking the problem head on.
After some initial carping about the lack of effort on the part of previous administrations and some serious encouragement from the State via a fine, Kriseman and his team have settled into the problem, and it looks like they have a viable plan that reaches into the future.
It doesn’t hurt that Kriseman term limits out in three years, so he won’t have to defend the water rates in a reelection bid, but he is also not sitting on his hands and passing the problem to the next Mayor.
In a longer view, putting the City’s water system on a sound financial and maintenance program may be a legacy piece bigger than the Pier and almost as big as the Tropicana site.
There will be a public hearing on the water rates on August 23, you can check the City calendar for time and location.
E-mail Doc at mail to: dr.gwebb@yahoo.com or send me a Facebook (E. Eugene Webb) Friend request. Like or share on Facebook and follow me on TWITTER  @DOC ON THE BAY.
See Doc's Photo Gallery at Bay Post Photos.
Disclosures:
Contributor to: Rick Scott for Senate