Democrats and the separated children not playing well at KFC

Paul Ryan and the Republicans got a complete pass. 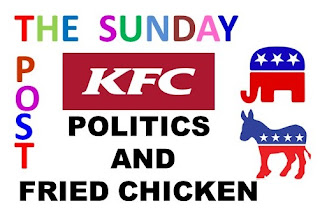 St. Petersburg, Fl
Opinion by: E. Eugene Webb PhD
Author: In Search of Robin, So You Want to Blog.
I stopped by my local KFC (Kentucky Fried Chicken) for lunch on Friday. This particular KFC is a busy store, especially at lunch, a good cross-section of middle class Floridians.
After I got my lunch, Original, mashed potatoes and the fixins’, I found a seat beside three lovely ladies also having lunch. They were senior citizens, all seemingly retired, two white and one African American.
They were discussing a wide range of issues, mostly political when the discussion turned to the recent problems along the border: namely the policy separating children from their parents.
It would not be a stretch to think at least one of these ladies was a retired school teacher.
The conversation was following the direction of what you see on the news, separation is terrible, children should not be used as pawns, etc. when it took a sudden turn.
I was expecting them to light into Trump in a grandmotherly sort of way blaming him for the whole mess, when they exploded, on of all people, Nancy Pelosi.
I dropped my chicken leg into my mashed potatoes and began listening more intently.
The discussion went about three rounds with each making their specific point about what a tragedy this was and agreeing that the real problem, is Congress not Trump and more specifically the culprit in the immigration issue is House Minority leader Nancy Pelosi and the Democrats for their unwillingness to compromise and get an immigration bill.
Paul Ryan and the Republicans got a complete pass.
I was shocked to say the least.
The closing comment of the discussion from the seeming facilitator was, “I think they should just all those kids over to Pelosi’s house.”
While I would quickly agree that three very nice grandmotherly ladies in a KFC in Pinellas County won’t get the child separation problem solved, a new immigration law passed or elect a democrat to the White House, governor’s mansion or the US House of Representatives, it just may be the Democrats are misreading the whole immigration issue as a plum in the upcoming midterms.
Given their knowledge of the political atmosphere, understanding of current issues and willingness to discuss the problems my guess is these three vote at every election.
Is all of wrangling by the Democrats on immigration and a host of other issues enough to get these three or even two of them to vote Republican instead of Democrat? Hard to tell.
One thing does seem clear. Someone in the Democratic Party better be checking with the base. It looks like the “get Trump at all costs” and “everyone hates Trump” concept may not be playing well in places like Pinellas County.
Democrats have always been like lemmings. Once they start over a cliff everyone follows.
Instead of spending all their time trying to get Trump’s head on a platter, the Dems better begin to accomplish some positive legislation they can take credit for and solve some problems like immigration. Otherwise, the midterms will be a real shocker.
E-mail Doc at mail to: dr.gwebb@yahoo.com or send me a Facebook (E. Eugene Webb) Friend request. Like or share on Facebook and follow me on TWITTER  @DOC ON THE BAY.
See Doc's Photo Gallery at Bay Post Photos.
Disclosures:
Contributor to: Rick Scott for Senate