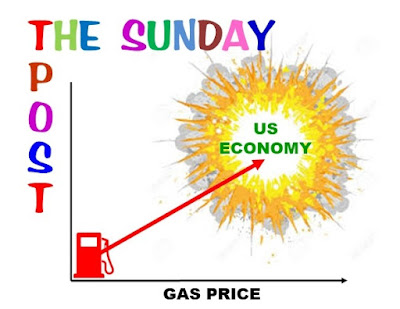 If you want to help with all of this consider an electric car.

St. Petersburg, Fl
Opinion by: E. Eugene Webb PhD
Author: In Search of Robin, So You Want to Blog.
You're probably watching gasoline prices go up and wondering what’s going on.
Well, the answer is a lot.
The seasonal changeover is in process, the petroleum industry sees a good economy and the chance to gain massive profits while most of us are distracted by our own lives and the machinations of politics, and some of the big geopolitical players in crude oil supply still think they can mussel the United States around by playing with oil supplies, think OPEC.
Trump Tweet:
Looks like OPEC is at it again. With record amounts of Oil all over the place, including the fully loaded ships at sea, Oil prices are artificially Very High! No good and will not be accepted!
— Donald J. Trump (@realDonaldTrump) April 20, 2018
With our economy, humming along these Petro players are trying to cash in while the geopolitical petroleum suppliers can’t get a handle on Trump, so they are trying a power play.
NBC News by Martha C. White:  Trump Adds Fuel to the Fire of Rising Gas Prices
How big is the impact of a rise in gas prices on our economy?
Market Watch by Steve Goldstine: Here’s how much $3-per-gallon gas will offset the tax cuts.cuts
"Every penny rise generally takes out billions of dollars from the economy in other avenues, and discretionary spending is always the first to take a hit," said Patrick DeHaan, a senior petroleum analyst with GasBuddy.
“The general rule of thumb is that every 1 cent per gallon more results in $1 billion less in consumption per year.”
What would the impact of gas at $3.00 for the rest of the year? About $45 billion in less spendable consumption for the year which would take a major bite out of the Trump tax cuts.
It is time for action.
The petroleum and gasoline business is a constant throughput industry and relies on a steady flow of product sales to maintain the massive amount of dollars that flow from consumer back up the chain.
Trump needs to issue a series of executive orders capping gas prices, freezing domestic crude oil and refined product exports and diverting them to domestic refiners and suppliers.
Further Trump needs to issue executive orders stopping the sale and shipment of all military hardware, ammunition, repair parts and services to countries holding us hostage with their crude oil prices. Again, think OPEC.
The oil industry from the well to the pump cannot stand even a brief hiccup in the process flow of oil and money. Let’s cause some of that foreign crude start piling up in ships that cannot unload, and OPEC tank farms and see how quick the price changes.
If you want to help all of this consider an electric car.
If you're in the market for a new car and your daily commute is less than 75 miles, there are a number of good electric cars that will meet your need. Every electric car on the road means a decrease in the amount of refined oil products we consume.
For now, it is time for Trump to step up and do what he does best call their bluff. My guess is he will win again, and OPEC and big oil will lose.
If you agree Tweet or e-mail this post to Trump or the White House and let the president know you are with him on this one.

Disclosures:
Contributor to: Rick Scott for Senate
Please comment below