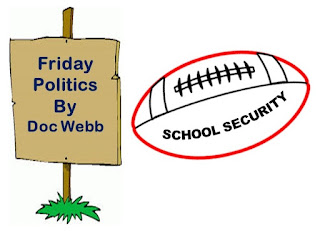 Superintendents and school board chair persons sounded collectively like a kindergarten class that had just been told recess was canceled.

St. Petersburg, Fl
Opinion by: E. Eugene Webb PhD
Author: In Search of Robin, So You Want to Blog.
The Florida Legislature could have done a better job setting up and funding the mandates in the school security Bill.
Every school district in the state started screaming the minute the Bill passed.
Was this accident, intention or retribution?
No one knows for sure, but public education does not seem to be the apple of the legislator’s eyes.
I am pretty sure the boys and girls in Tallahassee knew they were poking the bear when they moved funding to support the security mandate, just not enough, from school funding and left school districts hanging. Sort of a double slap in the face.
Superintendents and school board chair persons sounded collectively like a kindergarten class that had just been told recess was canceled.
These “leaders” of public education did what they do best they started looking for someone else to shoulder the burden.
For a while, it looked like the big cities and sheriffs around the state might jump in and help, but then reality set in, and they begin to see that they were being hood-winked into a never-ending funding pit with school boards going on their merry way while Counties and Cites get left filling the bag.
Suddenly, the School districts began to meet some surprising resistance. You can read about it in a Tampa Bay Times article Kathryn Varn: Pinellas commissioners won’t pay for more deputies in schools and from Caitlin Johnson Tampa Bay Times: St. Petersburg will no longer put officers in elementary schools.
Now it looks like The Pinellas County School district will use private security guards; see Tampa Bay Times Claire Mc Neill and Kathryn Varn Staff Writers: Security guards to be temporary fix in Pinellas schools.
It sounds kind of scary to me. If I had a kid in school and wasn’t already looking at Charter schools this would definitely push me over the edge.
The long-term fix being touted by many local school districts is the expansion or creation of their own “Police Departments."
This looks like a recipe for disaster on a number of levels. Most of these Superintendents and school boards can barely run a school system let alone a Police Department.
In an earlier Post, Whining about the cost of school safety, I addressed the real problem facing the Florida Public School system which is an overriding desire to live in the last century with bloated administrations, lavish non educational programs and an abiding desire to spend more money on everything but that the class room.
While the Charter school industry gradually picks the flesh off the skeleton of public education and delivers superior education and results, Public School districts have yet to offer any hint of restructuring, reducing costs or cutting non-core educational programs to help fund school safety.
They are simply playing the heart strings of school safety and hoping a big bag of cash will show up to make the problem go away.
So far, things are not looking too good.
E-mail Doc at mail to: dr.gwebb@yahoo.com or send me a Facebook (E. Eugene Webb) Friend request. Like or share on Facebook and follow me on TWITTER  @DOC ON THE BAY.
See Doc's Photo Gallery at Bay Post Photos.
Disclosures:
Contributor to: Rick Scott for Senate