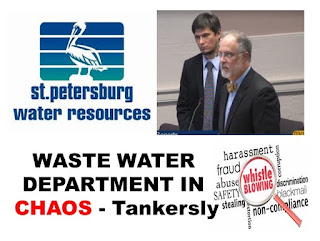 His face was sad; his body motions almost contorted and his signature bow tie somewhat askew.


St. Petersburg, Fl
Opinion by: E. Eugene Webb PhD
Author: In Search of Robin, So You Want to Blog.
Last Thursday’s St. Pete City Council meeting featured a report, more like an episode of a soap opera, entitled “Sewer Report” featuring Claud Tankersly, Public Works Administrator, in the lead role.
The event complete with intrigue, deflection, denial and betrayal was replete with hand wringing, whining, sad eyes, sorrowful but poor acting and accusations.
Craven Askew, the St. Petersburg treatment plant operator turned Whistle Blower, who informed all of us and City Council of issues with the treatment plants last year has raised the ire of St. Pete Public Works officials by once again blowing the whistle when one of his reports was modified.
Askew ‘s report said about 100,000 gallons of reclaimed water entered a ditch that led to Tampa Bay. Upon review by St. Pete Waste Water officials, the report was changed leaving out the part about leading into the Bay and Askew was not notified.
You can get more detail in an article by Josh Solomon in the  Tampa Bay Times St. Petersburg’s latest sewage mystery is quite colorful.
What struck me about Thursday’s Council meeting and Tankersley’s report was the demeanor more than the substance. Tankersly moaned and whined about the report with his “I’m saddened" argument.
His face was sad; his body motions almost contorted and his signature bow tie somewhat askew.
You can catch the whole somewhat disgusting episode on video at the City Council Sewer Report scroll down to Item 3  “Sewer Report” and listen/watch the woeful lament of  Claude Tankersly the City’s Public Works Administrator.
He blamed Askew for putting the “entire” wastewater department into turmoil. I suspect the reason the department is in a turmoil is most of them don’t trust management any more than Askew does.
It was clear that Tankersly was sending a strong message to the rest of the plant operators and the rest of the Waste Water employees to keep their opinions to themselves.
If you look carefully you will see a somewhat uncomfortable appearing Water Resources Director, John Palenchar, standing in frame dutifully nodding agreement with everything Tankersly says.
Great staging.
It would seem Tankersly is most upset because Askew originally reported as a whistle blower to protect himself, and once again invoked whistle blower status, since apparently, he (Askew) does not trust either of these guys any further than he could throw them.
Tankersly went on at length to firmly state “he” not think this episode rises to the level of whistle blower, but I am not sure what he thinks about the law matters much.
The point is, these two guys, Tankersley and Palenchar, are those selected to run the wastewater system. They only stop shooting themselves in the foot long enough to reload and Askew is handing them the bullets.
A lot of us have had employees who somehow manage to get themselves into a seemingly untouchable position but going out of your way to further agitate the man is just simply poor management.
And Tankersley’s argument regarding reconciliation that Askew had not “reached out to him” has to be one of the lamest excuses ever and brought reactions from Council Members Montanari and Kornell. (Scroll down the video).
All of this would be pretty good television and print if there was not so much at stake.
It is time Mayor Kriseman step in and get someone to bring some sanity and manage the chaos that his current team can’t seem to handle before something really serious happens again.
I can’t wait for the next episode.
E-mail Doc at mail to: dr.gwebb@yahoo.com or send me a Facebook (E. Eugene Webb) Friend request. Like or share on Facebook and follow me on TWITTER  @DOC ON THE BAY.
See Doc's Photo Gallery at Bay Post Photos.
Please comment below.