How many Noise Citations were issued to bar owners and residences in St. Petersburg?

Until recently, the City believed the noise issue was a downtown bar issue. After a resort had filed a defamation lawsuit against me on March 18, 2016 for calling the police about the noise and posting the noise issue on social media, I started researching the City of St. Petersburg’s noise ordinance and noise issue.


Almost two years later, the lawsuit's seven counts had been either dismissed, withdrawn, or voluntarily dismissed.


My research found the City had no idea there had been zero citations to businesses and the problem was citywide and involved both residences and businesses.

I requested the Police Call data and looked at noise and crime from 2009 to 2016. I found a correlation between the two that requires further study. I also found the City had not cited a business since 2009 for noise.

The police initially provided data that said there were 15 individual cited but these were not related to businesses. In March 2017, I submitted another Public Records Request for the calls. This time the police provided a list of 114 individuals cited for noise.

In 2014, there were 3,836 Noise Calls with 60 citations, or 0.2% citation rate for businesses and individuals, but I need the tickets to determine which addresses are for businesses.

In 2015, there were 3,357 Noise Calls with 21 citations, or 0.5% citation rate for businesses, but I need the tickets to determine which addresses are for businesses.

In 2017, there were 2,534 noise calls, 9 citations, where 2 appear to be residences. That is a 0.4% citation rate for Businesses. These calls were Wednesday and Thursday after 2 AM.

Of the bars cited, why were there hardly any citations as compared to so many noise calls? Maybe the real question is, Why were so many bars NOT cited when they had numerous repeat calls? These are questions residents need to ask their City Council Members.

How many bars were CITED or NOT CITED in 2016 and 2017? When you review the data in the table, you need to ask yourself the following questions. Why did Chief Holloway and his police department MISS THIS? Why did Mayor Kriseman MISS THIS? Are they protecting the bars? How much did these calls cost taxpayers? 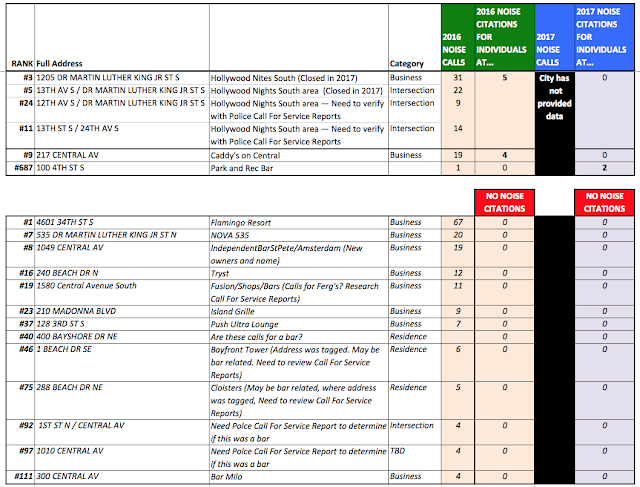 The City had no idea noise impacts adults and kids' health. The Centers for Disease Control and Prevention states, Noise-induced hearing loss (NIHL) is 100% preventable; however, once acquired, it is permanent and irreversible.


Although physical pain occurs at very high decibel levels, hearing loss actually begins at a significantly lower level, around 75 dB. When noise becomes too "loud" or maintains a certain decibel level over an extended period of time, hearing loss can occur.

Generally speaking, the more decibels a sound registers, the more intense the sound. For example, a conversation roughly registers somewhere between 55 and 60 dB while a vacuum cleaner is much closer to 70 dB. Because an increase of 10 dB doubles the "loudness" of a sound, an increase of just a few decibels is a large change in the actual volume the hearer perceives.

The dangers of noise range from being a mild irritant to a major health concern. However, what may be just an irritation to some has been linked to a variety of health concerns, problems, learning disabilities, and other such ailments in others.

Source: Come on Feel the Noise: The Problem with Municipal Noise Regulation

The City and Police have not been concerned about your hearing, nor are the bar owners who are fighting the noise ordinance!

The City is proposing 75 dBA for the entertainment area that is adjacent to residences and hotels. During the afternoon election party for the Rowdies Stadium referendum at Jannus Landing, I walked back to my car. I stood on the corner of Signature Place facing Al Lang Stadium. While I heard no noise from the street behind me, I heard and felt a loud reverberation bouncing off Al Lang Stadium. This is how low frequency noise works and the City and bar owners do not understand this!


The U.S. Supreme Court has recognized that government "ha[s] a substantial interest in protecting its citizens from unwelcome noise.  Source: Come on Feel the Noise: The Problem with Municipal Noise Regulation

Why hasn't the City acted? I can point to Mayor Kriseman's lack of concern and understanding of the noise issue. In 2015, I had been working with Assistant Chief Kovacsev on the noise from an outdoor bar over 1000' from my condo. The Mayor and Council were made aware of the issue. But in an email to Assistant Police Chief Kovacsev in 2015, Mayor Kriseman's office staff replied on his behalf to Kovacsev, I also want to apologize for what seems to be a significant waste of the officers time in dealing with this, I know you have better things to do.

At the 3rd Noise Ordinance Public Meeting on March 6, 2018, I asked a new Council Member when they would act to revise the Noise Ordinance? He said, they are working on it. I replied, we have been suffering for at least four years and the City has had ample time. Mayor Kriseman and City Council has had the data for two years.

If you want action, email your Mayor Kriseman and your City Council Member!