Calling St. Pete Police for noise gets you labeled as re-occurring complainant 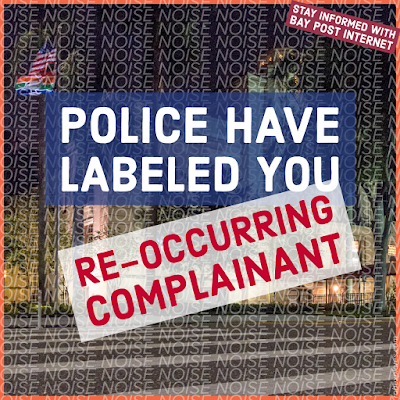 
The St. Petersburg police are not enforcing the noise ordinance. Mayor Kriseman is aware of the noise issue and has not directed Chief Holloway to enforce it. If you call the police to report a noise issue, you may have:


This has created a chilling effect on neighborhoods, where residents live in fear of being targeted by the police, sued by a bar, or ostracized by the neighborhood. Lawsuits have a chilling effect, especially for people on fixed incomes or seniors, who want to help but will not come forward. They know they cannot afford $2500 for an attorney. This will get you started, but is not enough. The lawsuit may cost anywhere from $5,000 to $50,000.

The frustration is evident and many have given up calling the police. City Council Members have stated the reduction in calls is due to the new ordinance in 2014 and revision in 2016. Council Members do not have the research to prove that statement and should refrain from publicizing this until the research has been conducted and analyzed. The Police have had the data for years and have not conducted trend analysis.

The police knew there was a problem, yet, failed to run a proper investigation of the noise issue. Had they done so, they would have seen this and more: 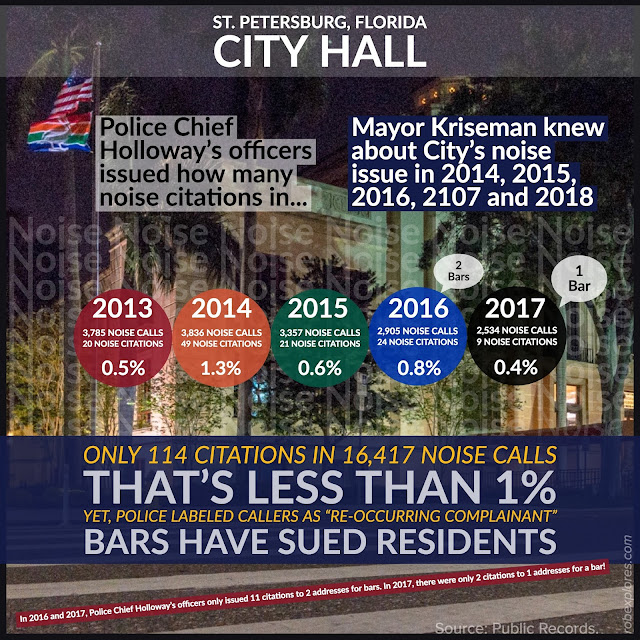 A solid argument can be made that the lack of enforcement and frustration is a stronger reason than a change in noise ordinance to cause a decrease in noise calls! Lack of citations have been a strong contributing factor. They have been almost nonexistent as compared to the number of calls.

By responding to the calls and not citing the bars and residences generating noise, Mayor Kriseman and Police Chief Holloway have wasted resident's taxes. One note: Police do not cite bars, per the noise ordinance, which states the individual managing the bar are to be cited.

The City was made aware of the noise issue countless times prior to 2014. Back then, the City thought noise was a downtown issue between the residences and the bars. That is, until I started calling about the noise from an establishment that serves alcohol in South St. Petersburg and discovered otherwise. There are more repeat noise calls to residences than bars and this is a citywide issue, not a downtown issue.

I worked with the local Community Service Officer to address the noise issue with the local establishment. I told him there were other callers. I even had been elevated to work with then acting Assistant Police Chief Kovacsev. He used the Police CAD system, which issued a report of calls. He said I was the only caller. Yet, the Police could not tell me which noise ordinance applied.

Had he listened to the audio tapes and read the incident reports, requested the data and analyzed it, expanded the timeline to understand the trends, reviewed the Call For Service Reports, he would have known I was not the only caller and there was an issue. Both Chief Holloway and Major Kovacsev should have asked why the establishment had 180 calls from 2009-2016 and no citations?

I started making Public Records Requests for information and digging into the data. I shared the results with the Mayor, City Council, and Police. They failed to act upon the data. Why? An obvious question that had to be considered was, were they protecting the bars?


The City thought the issue was just with downtown bars. Then why was the City protecting the bars and blaming residents?

In March 2018, the police provided me with an updated spreadsheet on the citations that showed there had been 114 citations issued to individuals. The previous spreadsheet obtained through a Public Records Request had 15 calls.


I have logged over 50 excuses why the responding police would not cite an establishment.

In December 2015, Police Legal Advisor Andrea Luce provided guidance on the correct noise ordinance to use for establishment. When you read the ordinance, the referenced paragraph provides the distance from the establishment and the time noise is allowed. However, on multiple occasions the responding officers did not follow this guidance, changed the paragraph that applied and said I was 1000' or 3000', or they verbally old me that they would not follow Police Legal's advice.

One officer, who admonished me for taking decibel readings across the street from the establishment and sending them to the Mayor and Council (Decibel peaks were 97 dBA), documented his response in a Police Incident Report.

The officer refused to accept and review the copy of the Police Legal Advisor Luce's email. I have a witness to that conversation with the officer. I read his Police Incident Report. It was inaccurate. I notified the Police and was told this would not be changed.

On December 15, 2015, Police Legal Advisor Andrea Luce had asked Officer Kelly to provide a copy of the ordinance to the establishment. I was never copied on the email. Why not? I had been working with the Police, but Police and Police Legal seemed to be throwing up a roadblock ever chance they could. 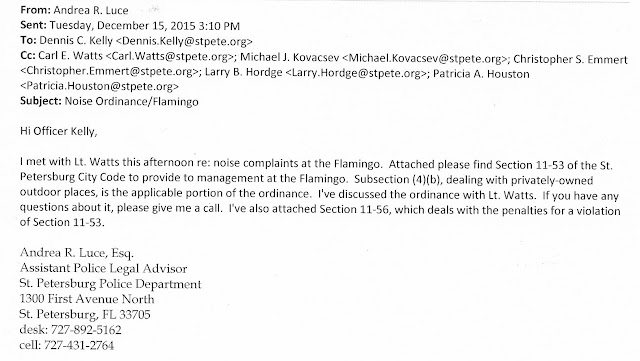 In 2016, the new Community Service Officer came to call me a re-occuring complainant. Officer Rulison, Police Advisors Sasha Lohn-McDermott, Andrea Luce never once offered to speak to me about the noise issue to hear my side. 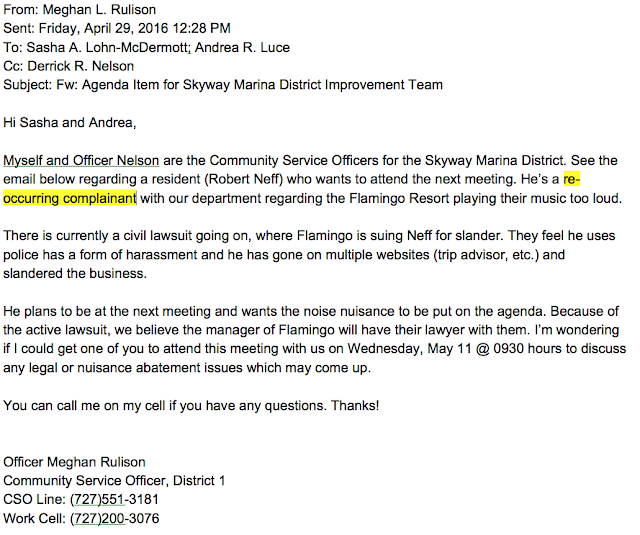 In the email, the referenced Flamingo Resort's owner is the President of the Board for the Skyway Marina District.

According to court documents filed on March 18, 2016, EDGE PARTNERS LLC d/b/a Flamingo Resort filed a civil lawsuit against Robert Neff seeking damages that exceed $15,000 exclusive of interests and costs. The five counts were:

The Community Service Officer and Police Legal have never offered to meet and discuss the issue. They never apologized for labeling me a "re-occurring complainant."

The research I conducted to identify the problem was a significant cost in both cost for the Public Records and my time. Not once did Mayor Kriseman or the Police offer to reimburse me for my Public Records Requests.

Mayor Kriseman and Police Chief Holloway have failed to address the lack of oversight, failed to enforce the noise pollution ordinance, failed to protect us in our homes from noise, and have not apologized to the residents labeled called re-occurring complainants or problem callers. They should, but that would take leadership.