My football boycott – season wrap up 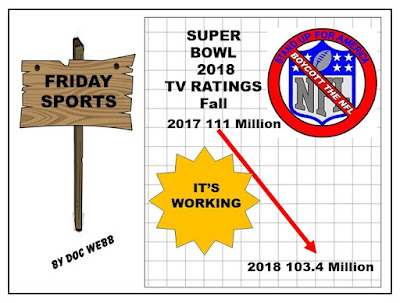 If you have been following this Blog, you probably know that following the decision by NFL players to protest the National Anthem and the NFL’s totally lame reaction, I decided I had had enough of the minority privileged disrespecting our flag and all it stands for.
The actions were disgusting enough but the NFL, and most of the owners seemed to be like a deer caught in the headlights not knowing which way to jump.
In my most Post, My NFL protest continues – and it’s working I looked at the NFL’s declining TV ratings, arguably the NFL’s pocketbook, and things continued to get worse as the season rolled along.
It appears things got even worse for the Super Bowl, here are some links:
Super Bowl LII: Ratings for football's biggest game lowest since 2009
Eagles’ 1st Super Bowl Win Draws 103.4M Viewers, Smallest Audience In Nine Years – Update
“An estimated 103.4 million people watched the Philadelphia Eagles beat the New England Patriots in the Super Bowl, the smallest audience for television's biggest yearly event since 2009.”

We did not watch the watch the Super Bowl, so you can count us in the missing viewers.

What has been most interesting is how not watching football on TV has affected some of our buying habits. Making a genuine effort not to purchase products from companies who support the NFL, we have made a surprising number of new discoveries in household products that we buy on a recurring schedule and have permanently switched to them.

We also made a change in local grocery stores and have been avoiding the chain restaurants that support the NFL.

I hope the $5 million or so the advertisers ponied up for the Super Bowl Commercials was worth it.

We kept a loose running total of diverted purchases in house hold goods, retail, restaurant, small ticket and big-ticket items, and it looks like to total added up to about $4500.

I noted with interest some if not all the winning Eagles Team planned to boycott a trip to the White House. It seems like a good idea to me. They have no respect for the country. Why would they have any respect for the office of the President?

I hope they follow through or better yet the White House declines to send or rescinds the invitation.

Why give these people another platform to give us the finger?

As the year goes on we will continue the effort always looking for that little NFL logo on the package or ad and making our buying decisions accordingly.