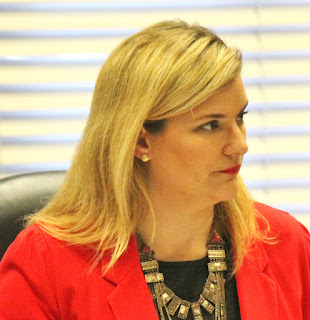 Gabbard was elected by the public not by the Realtors – or was she?

St. Petersburg, Fl
Opinion by: E. Eugene Webb PhD
Author: In Search of Robin, So You Want to Blog.
It was a 6-hour long marathon of neighbors exhorting St. Pete City Council members to up hold the Development Review Commission’s 0-7 decision to reject the developer’s plans for a 23 story 28-unit condo on 4th Avenue just off the St. Pete waterfront.
The thing was a hideous over reach towering 16 stories above the next highest structure near it, the Flori De Leon.
You can get more detail in the Tampa Bay Times article by Susan Taylor Martin: St. Pete City Council says no go for 23-story Bezu condo tower.
The next step is a decision by the developer Michel Reginano, who says he has over $2 million invested, to appeal to a circuit Judge.
Reginano, who lamented he “followed all the rules” really didn’t follow them as much as he used them to fenagle a monstrous structure on a very small piece of land.
As interesting as all of this was, what should be even more concerning was the comments and vote by one of the Council’s newest members Realtor Brandi Gabbard.
It did not take long for Ms. Gabbard to, as one of the Relator/supporters of the BEZU said, “put on her proud relator’s badge” and come to the defense of the BEZU developer.
You can check out Gabbard’s real estate credentials at  Smith and Associates Real estate website.
Gabbard’s lame excuse for voting for this totally inappropriate development project was “he followed all the rules."
Well clearly, he did not as neighborhood member after neighborhood member indicated they were never contacted or advised by the developer as is required “by the rules”
This was my concern about Gabbard when I gave her a nod for City Council in my Post St. Pete City Council Races: Bankers, Realtors, Cowboys, Activists, Professional Politicians and a young newcomer. The choice is yours.
It did not take Gabbard long to show her Realtor “stripes” and in doing, so I think she made it obvious she will present a clear and present danger to individual citizen's property rights over developers and real estate interests and is unlikely to be a friend of the neighborhoods.
The potential conflict of interest issue with Gabbard is very real.
I know City staff goes over the conflict of interest issue with new council members, and Gabbard needs to remember that or get a refresher. I still have to sign one of those conflict of interest forms for state every year, and I take it very seriously.
I remember what one of my favorite City Attorneys once told me about serving on a committee, “no one ever went to jail over an abstention.”
There is no apparent conflict in this case, but the tentacles of real estate sales and development are a tangled web of cooperation, favors and deals and Gabbard and her firm need to be aware that even to the most innocent-looking vote could create a serious problem.
Public service is a great experience, but as an elected official, the public puts their trust in you to protect their interests.
Gabbard was elected by the public not by the Realtors – or was she?
E-mail Doc at mail to: dr.gwebb@yahoo.com or send me a Facebook (E. Eugene Webb) Friend request. Like or share on Facebook and follow me on TWITTER  @DOC ON THE BAY.
See Doc's Photo Gallery at Bay Post Photos.
Please comment below.