Kriseman is getting hemmed in on his sanctuary city 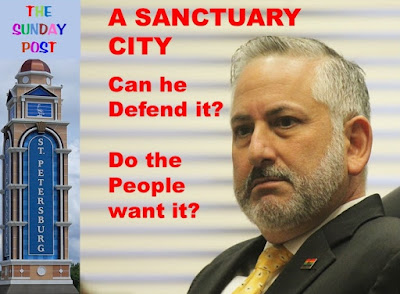 Two events occurred this week that may send the good mayor looking for his own sanctuary.

St. Petersburg, Fl
Opinion by: E. Eugene Webb PhD
Author:   In Search of Robin, So You Want to Blog.

It looks like St. Pete Mayor Rick Kriseman’s election sanctuary city ploy for a few more votes may be coming home to bite him.

To be fair Mayor Kriseman has been snuggling up to the sanctuary city idea since he first became mayor. Kriseman seems to have a problem deciding between following the law and pandering to his far left constituency.

Other than those that are here illegally, I don’t think there are a whole lot of people in St. Pete, who think the sanctuary city is a good idea.

I also note that Kriseman’s frequent political partner, Mayor Bob Buckhorn has been more or less silent about the sanctuary city issue. I guess he would be happy if all the criminal illegal aliens were in St. Pete.

Fact is sanctuary cites are illegal, in reality, and questionable in “philosophy” which is what Kriseman slips into when challenged.

Two events occurred this week that may send the good mayor looking for his own sanctuary.

First Richard Corcoran, Speaker of the Florida House of Representatives said, “Unfortunately, my state of Florida has two elected mayors — one in Tallahassee and another in St. Petersburg — who’ve publicly stated and continues to openly advocate for these illegal sanctuary policies,” Corcoran wrote in a letter to Homeland Security Secretary Kirstjen Nielsen on Wednesday.

You can get more details in a Florida Politics article by Ana Ceballos: Richard Corcoran to DHS: ‘Immediately’ investigate Andrew Gillum, Rick Kriseman

Corcoran also said, “I strongly believe that any elected official who picks and chooses which laws to follow and which to ignore, should be removed from office.”

The second shoe dropped when Pinellas County Sheriff Bob Gualtieri held a press conference to announce an agreement with Immigration and Customs Enforcement(ICE) regarding the procedures law enforcement will follow when detaining suspected illegal immigrants who have committed crimes.

The original requirements presented real legal and practical problems for sheriffs who are charged with enforcing immigration rules.

We were never really sure where St. Pete's Police Chief Tony Holloway was in all of this as he seemed to float around the issue. Now with the sheriff’s concerns resolved the question is will Kriseman or has Kriseman instructed Holloway on any “special handing” of illegal immigrants suspected of a crime?

Will Kriseman back away from his desire to see St. Petersburg a sanctuary city or will he double down?

Will Homeland Security Secretary Nielsen take Corcoran’s request seriously and begin an investigation of Kriseman? The Homeland Secretary could probably make some big points with her boss, President Trump, for taking a swing at the guy who banned Trump from his City.

If all of this was not so serious, it would be good theater.

There are some serious ramifications if this thing goes sideways.

It’s time for City Council to make “no sanctuary city” declaration, and put in place the necessary protections that would prevent the City spending untold hundreds of thousands of dollars defending Kriseman in an investigation, indictment or trial.

Unless the seven democrats on City Council want to follow their leader over the cliff.