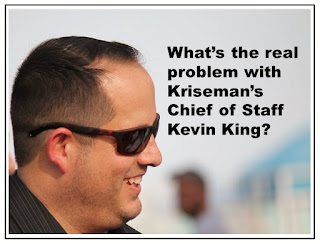 As the Rick Baker Campaign and his Political Action Committee raised the spector of Kevin King’s past, the emphasis seemed to be more on what King did in contrast to how that impacts the present circumstances.

I have had only two dealings with Kriseman’s Chief of staff.

The first was a telephone interview that went terribly wrong following this Post:  Sunday  December 22, 2013 Kriseman and King - Will it work?  right after he was appointed  as Kriseman’s Chief of Staff and resulted in this Post A Not So Casual Conversation with Kevin King.

The second was a very unpleasant confrontation at the first Pride event after Kriseman’s election when I was taking some background pictures. King, who is notoriously camera shy, confronted me as to why I was taking pictures, asked me if my retirement was paid by the City (it is not) and wanted to know where my “money” came from. All of this in front of my wife who was accompanying me. I just laughed at him turned around and walk away and then turned back and shot a few more frames.

As the Kriseman administration wore on my former coworkers, and managers would simply roll their eyes when I asked about King, but the official response was “no comment, or simply you cannot trust him.

Rick Kriseman is a seasoned political veteran, and he knows King is a liability.

When I questioned Kriseman before the 2013 election about Kevin King, he became openly angry and threatening when I brought up the King issue.

Why would you drag along an ill-tempered ticking time bomb if your goal was a successful political career?

So, what is the relationship between these two?

There have been a lot of calls for King/Kriseman to open the Records on King’s Juvenile sex solicitation charges, but I am not sure that would do any real good.

Some much more revealing questions would be:

Who was King’ s attorney of Record?

Kriseman and King spent a lot of time in Tallahassee together. What lobbyists did they work with? Where did they hang out?

In the interim between Kriseman’s stint in the Legislature and his election to the Mayor’s office what was Kevin King doing, and was he on Kriseman’s payroll?

I could go on.

The issue here is not about Kevin King it is all about Rick Kriseman’s character.

This whole mess shows the true face of Kriseman’s competency and honesty. Kevin King now oversees an area where would not be hired, he is only there because his buddy is the Mayor.

King should have never been added to the City Staff, he should never have become a parked political operative on the taxpayer’s dime and to put him in charge of educational policy goes further than ignoring the public’s Pier pick. It is like standing on the steps of City hall and giving every St. Pete citizen and parent the finger.

·         King’s actions are abdominal, but Kriseman made the decision to put him on the City Payroll.

·         King typifies everything that is wrong with local government: privileged, over paid, protected, incompetent, and morally unfit for the job.