”Momma Tee” is running for Mayor of St. Petersburg 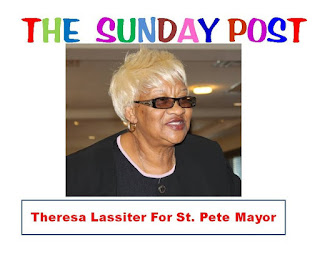 "Momma Tee” has a raging temper, a short fuse and little patience for political stupidity.

Right up front let me say I love "Momma Tee." I always have always will. What do I love most? The hug I get every time we meet.

I’ve been watching "Momma Tee” for almost 25 years as she pinned back Mayors and Council members ears asking questions most of us wanted to ask but were afraid to or couldn’t.

If you have followed Theresa Lassiter’s metamorphosis from screaming street-level organizer to a political activist, to a community contributor, to Mayoral candidate, you have followed a struggle of epic proportions.

Along the way, "Momma Tee” has learned from her interactions with politicians, her City, and her constituency which I believe is a lot bigger than many people think. In the process, she lifted herself up culminating in a degree from St. Petersburg College.

Momma Tee” has a raging temper, a short fuse and little patience for political stupidity.

In the beginning, her rants for the cameras at City Council were all raw emotions, but as with everything else about Theresa Lassiter, her public statements have morphed into often carefully thought out piercing commentary.

Theresa Lassiter changes the dynamic of the St. Pete Mayor’s race. She puts the African-American vote clearly in play. She puts the issues of crime, kids, education, policing and common sense squarely at the top of the agenda.

Stop and think about any mayoral debates.

"Momma Tee's" presence changes everything. Fearless, unafraid to speak her mind the political correctness of the debate process will likely go right out the window.

For Baker and Kriseman, it is a completely new game.

Long reliable St. Pete campaign tactics will not work as they have in the past.
The Primary and the General election just got more expensive.

Street level organizing will be more important than ever.

Any debates or public forums become potential flash points. One slipup or condescending comment in a back and forth with "Momma Tee” in the media or a debate could cost either of the big guys the election.

There was at least a chance the election could be decided in the primary. If Theresa Lassiter can qualify - not a chance.

This political contest just went from all politics to a contest that is somewhere between walking through a minefield and walking on egg shells.

Many in the African-American community and the rest of St. Pete may just cast a vote for "Momma Tee” in the primary to keep things interesting.

Can Theresa Lassiter win the Mayor’s race in St. Pete?

Not this time, but she quite likely will determine who does.