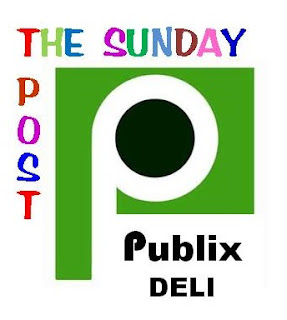 I shop at Publix a lot, especially the Deli.

I shop there for a number of reasons; the deli products are good; the selection is great and the comradery among the customers, and the staff was very special.

It all began in February with this article by Laura Reiley Tampa Bay Times; Publix no longer offers you that free slice of meat at the deli counter

Then there was this from Wayne Price at Florida Today; Publix: We're still giving out free deli meat samples.

In their outstanding way of managing their press, the Publix folks just went on not responding much and gradually the free samples have gone away.

First, it was with a question from the server, "would you like this," as he/she held the tempting morsel just out of reach with a scared look that you might say yes.

Then there was the first slice held up from the slicer with, "is this OK?"

I get the problem. I could not find any numbers but the amount of product given away corporately by Publix would probably astound you.

There is a greater loss here than just a free piece of cheese or lunch meat. Since the dawn of time, one of the primary ways we connect with each other is over food.

I looked forward to going to the Publix Deli and standing with other customers and sharing a bite or two and a little conversation.

I have met some interesting people at the Publix Deli.

Often a conversation about current events, kids, church or school would start up sometimes with several joining in. It seemed friends tended to show up at the deli at the same time.

The conversations did not last long. Usually, they were timed by how much lunch meat and cheese you were buying, but they were often a bright spot in my day, and I am sure many of those Publix customers who live alone got a lot more than just some meat and cheese from their visit to the Deli.

I also noticed that those who work in the Deli knew their customers, seemed to enjoy handing that slice of cheese or meat over the counter, and the banter between customer and server was often as entertaining as the rest of the conversations.

Most of that is gone now. Customers walk up to the deli counter place their order and just stare off into the distance. Servers approach the case with a hurried look, obviously not wanting break the "no free slice" admonition from management.

People, who used to willing to chat with a free piece of cheese in their hand, now grab the neatly sealed bag toss it in their cart or basket and hurry away.

No different from any other grocery store some would say.

True, but I can honestly say shopping at the Publix Deli is not nearly the pleasure it used to be.