Businesses and Residences with more than 6 repeat calls for noise in St. Petersburg, Florida

Noise is not just a downtown issue in St. Petersburg, Florida. It's citywide.

The interactive map plots businesses and residences addresses with more than 6 repeat noise calls. Use this The toggle button,

to toggle between the  toggle the business and residences layers.

For addresses with greater than 6 repeat noise calls, residences account for more calls than businesses. However, businesses have a higher population density than residences. Thus, business noise has a greater impact on the nearby population.

In 2016, the #1 and #2 ranked business for repeat noise calls were not downtown but in Skyway Marina District and Bartlett Park Neighborhood, and they are, respectively, Flamingo Resort and Hollywood Nights South. 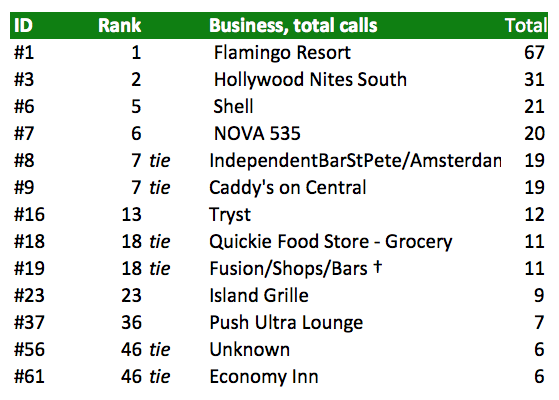 The data investigation found that addresses could be separated into four categories:
An analysis of the addresses with more than six (6) repeat noise calls revealed 59 addresses accounted for 650 calls, where:
Three intersections are not included in above map.
The businesses that had greater than 6 repeat noise calls are listed here:

† Need to research the Call for Service Report to determine if this was for the bar that moved out.

When the City of St. Petersburg noise issue became an issue for others and him, Mr. Neff dusted off his skills to conduct an investigation, data collection and data analysis.
Should you have a noise-related story to share or have a question, contact me directly via email.