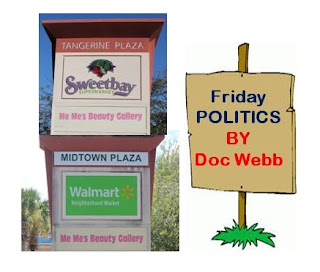 If there was a conceptual problem, it was the grocery store was too big.

Tangerine Plaza once thought to be the jewel of Midtown is once again in a state of turmoil. The latest tragedy is the closing of the WalMart store, the second major retail grocer to exit the Plaza.

Here is some background detail from the Tampa Bay Times:

The Kriseman administration was seemingly blindsided by the WalMart announcement.

The solution for this problem is very complex.

Recently, I attended a City sponsored meeting designed to present the City's current position and to solicit input from the midtown residents as to what they would actually like to see happen, now that WalMart is gone.

There were a good number of people present.

Watching and listening it appeared to me that there are two factions concerned about the presence of a grocery store in Tangerine Plaza.

The first group is those that actually depend on a retail grocery outlet in that location to meet their grocery and fresh produce needs. Many of these people have no transportation (automobile) of their own and find public transportation inadequate.

The second group is those who see Tangerine Plaza and a large grocery store as a political statement of the continuing change in a struggling community. To them, Tangerine Plaza and first Sweet Bay and then WalMart represent a recognition that the midtown community is lifting itself up.

Tangerine Plaza was a political solution promised and delivered by the Rick Baker Administration.  It, in fact, was the answer to these two challenges, retail grocery for those who desperately needed it and a symbol the community could look to as it tried to become more relevant. Baker almost singlehandedly carried the Tangerine Plaza to a successful conclusion on his shoulders.

If there was a conceptual problem, it was the grocery store was too big.

At 40,000 square feet, a retail grocery outlet in that size space requires significant volume. The volume never materialized and first Sweet Bay and the WalMart simply gave up.

There were a number of comments at the meeting about how WalMart operated the store with restricted entry and exit, and the quality of the merchandise, especially perishables. These are the types of issues that the Kriseman Administration should have looked into long ago.

When customers and especially customers who are to some degree a captive audience are being abused or taken advantage of the City has an obligation to get involved.

Now the problem is what to do next. There will be more meetings and discussions. However, the entry of another large grocery retailer into Tangerine Plaza seems remote. Even with a 1 dollar a year lease and expanded security the site is unlikely to attract much interest.

The real issue here is how to meet the demands of both constituencies of Tangerine Plaza.

There has been a number of grocery or grocery type stores open nearby according to City staff, and while the Walmart closing may still seriously affect some residents, the need for a large grocery outlet does not seem to be so pressing. Of most concern was fresh produce and perishables, and that need could be met in a much smaller space.

With the Manhattan Casino shuttered and the anchor store in Tangerine Plaza gone the impact of symbols designed to encourage the community to reinvent itself are lost for the moment. That is what has the political activists, organizers, politicians and those working so hard to make midtown better so concerned.

The Kriseman administration cannot sit idly by or merely have a series of meetings while the centerpieces of midtown redevelopment gradually disintegrate.

Those running for office, mayor and City Council, will obviously use this problem as a campaign tool. Kriseman will have hard time making the case; he will fix Tangerine Plaza and the Manhattan Casino in a second term given how much he ignored them in his first term.

Once the City has possession of the property, they need to put a plan together quickly to adjust the space and look for tenants who can meet the needs of the midtown community.

Tangerine Plaza can still be the beacon of hope it was conceived to be, but the scope must be adjusted along with the physical space to ensure that those who do business there can be successful.