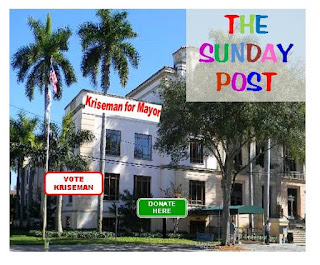 I guess it is OK to use your tax money to get the stuff posted, but you really shouldn't read it.

Kriseman wants to spend $225,000 promote the City on social media.

The Kriseman Administration pulled what looked to be a fast shuffle adding the controversial  item to Thursday's City Council meeting agenda at the last minute.

According to Nina Mahmoudi, City Creative Services Manager, who even knew that job existed, the idea is to use the money to "attract" influencers who will post and tweet positive things about the City.

No real detail on how this "attraction" will be generated could be wining and dining, pay for play, bribes; free coffee - help us out here.

Maybe Ben Kirby will just write the stuff and they will pay the bloggers to post it.

I wonder whether Kriseman will list the $225,000 as a campaign contribution.

Deputy Mayor Tomalin didn't really help out that much when she said, "the online stories, photos, tweets, videos and other posts about the city would not be intended for residents."

I guess it is OK to use your tax money to get the stuff posted, but you really shouldn't read it.

Maybe Kriseman can pick up the Pit Bull deal.

It's not really clear who these "influencers" are. You can bet my name is not on that list, but it is also a good bet you will see their names show up in the campaign-finance reports.

This administration is the most politicized since the City moved to the strong Mayor form of governance. Kriseman's two top aides Communication Director Ben Kirby and Kevin King Chief of Staff were both high-level campaign operatives during the Mayor's first campaign.

Somewhere in the Frago article, Ben Kirby is quoted as saying, "There is a very distinct line between the campaign and the work of the city. And nothing related to the campaign transpires inside City Hall."

And that line is right where we quit working for the citizens of St. Petersburg and try to sneak really dumb ideas like this one past City Council.

By the way, if you believe that whole line "nothing related to the campaign transpires in City Hall," give the boys a call. They have a large bridge just south of the City for sale, and they will make you a really good deal.

King and Kirby need to go now. They should have resigned the day Kriseman filed for reelection.

This election will get really messy, and the ethics people should keep a sharp eye on the goings-on at City Hall.