It’s time to get St. Pete City Council some help 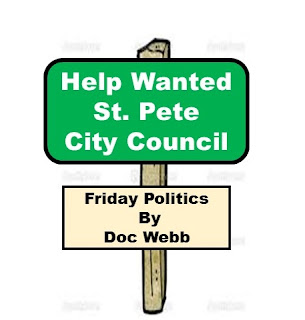 In the past many City Council members held full-time jobs.


St. Petersburg Fl
Opinion by: E. Eugene Webb PhD
Author: In Search of Robin
Ten years ago, you could make the argument that being a City Council Member in St. Petersburg was a part-time job.  Not so any more.
The job of being a St. Pete City Council member started getting more complicated and time consuming when the City decided to build a baseball stadium without a team.
From that day, right up to today the City Council job has morphed into a significant challenge. As time moved forward from that fateful decision in the 1980’s the City has continued to take on more and more sophisticated challenges.
In 1992 when the government structure changed from a City Manager who basically ran the day to day business of the city like a corporation where City Council served as board of directors providing overall guidance to a structure where the elected mayor runs the day to day business the City Council role in detailed decision making has appropriately increased.
In the past many City Council members held full-time jobs. Meetings were short, outside demands on Council Member’s time were less.
The rate of change really ramped up in the late 1980’s when City Council meetings went on the local cable television system, and later the City’s broadcast television station. All of this exposure increased pressure on Council members to interact with the public and participate more effectively in the day to day operation of the City.
Today the job is a fifty to sixty-hour week many weeks during the year, and the amount of reading, research and analysis required to properly represent a District are truly overwhelming.
There has been talk in the past about adding some support staff to the City Council. Usually, it seems  just to self-serving and has never been seriously considered.
That changed this week as Darden Rice put forth a recommendation to add four positions costing between $250,000 to $300,000 to provide research, logistical and constituent support.
You can get some detail in the Tampa Bay Times article by Charlie Frago, Times Staff writer; St. St.Petersburg City Council wants to hire some help navigating a sea of paperwork.
"I really see this as increasing the efficiency of City Council," Rice said.

With operating and capital expenditures, the total City Budget is almost a half a BILLION dollars. The issues are complex both technically and structurally, to say nothing of the politics that continues to creep into the City governing process.

This is a budget item that needs to go into the next budget along with a policy outlining hiring, duties, responsibilities and limits on turning these jobs into political appointments.

There will be those who claim loudly this is a waste of money, but to get good decisions, real constituent representation and a City Council that comes to the meetings prepared to the right thing for the City the time has come to add professional support for Council members.

It’s way past time to add functional support the City Council side of the house, and with the proper structure and controls the result will be a better City Council, better decisions and improved constituent support.