Kriseman's St. Petersburg – A sanctuary City is that your City? 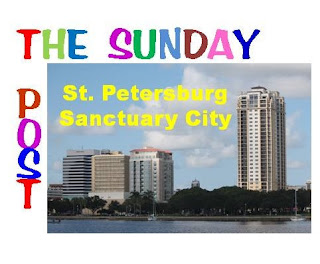 
Opinion by: E. Eugene Webb PhD
Author: In Search of Robin, So You Want to Blog

I have watched the Rick Kriseman St. Petersburg Sanctuary City issue with amazement.

It would seem the mayor is as impetuous with the keyboard as is our new President.

I am not sure if the Mayor is serious, pandering, looking for clicks, trying to build a constituency, or parroting the Trump method of getting attention.

This whole effort is so wrong on so many fronts it is hard to know where to start.

Kriseman has been completely out of touch with his City since the day he took office.

The seeming inability to look past 16th Street West and North of 22nd Avenue, the Mayor does not begin to understand who constitutes his City.

The argument against the Trump immigration ban and the President's immigration stand are valid arguments.

However, St. Petersburg, for all the Mayors' focus on millennials and a "younger" City is made up of retirees, and those who live here to be safe from threats.

If these people wanted to live in a sanctuary city with lawbreakers roaming the streets, they would have relocated to one.

The reality of a mayor hamstringing his police department, setting up conflict between the County Sheriff and the City and  going against the law of the land while  compromising the safety of everyone in Pinellas County is compelling evidence that Kriseman does not deserve a second term.

Kriseman's position is "if I don't like a law, I'll just not enforce it." What that position leads to is anarchy.

Kriseman got his 15 minutes of fame and made the City, he claims to love look foolish in the process.

A lot of us have issues with President Trump's policies, but our opinions are our opinion. A Mayor's opinion becomes the de-facto opinion of a City and its residents.

Kriseman's approach can draw to St. Petersburg the very people the law refutes and is designed to deter.

People who violate the law, whatever that law may be have violated the law. They are to be recognized for what they have done and be treated, as the law requires until that law is changed.

An elected politician, regardless of who he or she may be, does not have the luxury of picking what laws will and will not be enforced.

As I write this, the Florida Legislature is considering legislation that would penalize Cities and Counties that set themselves up as sanctuaries.

Let's hope Kriseman comes to his senses before he does anymore harm to St. Petersburg.