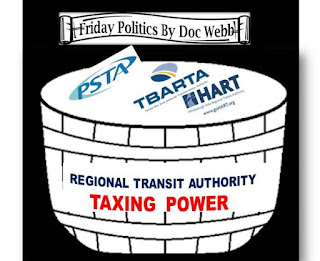 It's Time to get the band back together. Opposition against this regional transit authority needs to get active now.

The current local Boards of directors have not been particularly effective and there is little reason to believe that a super board or authority made up of the same folks would do much better.

These Authorities tend to operate out of public view, managed by paid Executive Directors and a paid staff that invests its time in promoting a preconceived idea of "public transit." The result is typical of the Powers story.

The motivation behind this effort is the three failed referendums in Pinellas and Hillsborough Counties to initiate a sales tax to fund public transportation.

Never mind, the fact that Bay area voters have three times resoundingly rejected the idea of a sales tax to buy the politicians shinny buses and light rail trains, Long and her growing group of supporters want to work their way around all of those pesky referendums and tax you without your ability to have a say.

Like most of these efforts to organize authorities, the real object is money not public transportation. "Public Transportation" is on the banners, signs, ads and promotional materials but what is really at stake is a high-level authority with State authorized taxing powers that the voters cannot regulate.

Few were more aggressive in their support of an angrier when GreenLight Pinellas failed than Janet Long.

Long's regional transit authority is a behind-the-scenes low profile effort to push legislation that will create a taxing authority.

It is time to get the opposition to this regional authority up and running and let legislators know that the Long plan for a regional transit authority is a non-starter with the people who pay the bills and vote.

Let's get NO TAX FOR TRACKS back on the road again.