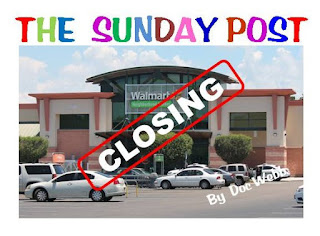 This development, Tangerine Plaza is a key to the continued redevelopment of South St. Pete

To quote Yogi Berra "It's like déjà view all over again" Another major retailer/grocer cannot make it work in St. Pete's South side Tangerine Plaza.

The typical reaction of the local politicians is to wring their hands and ask what they can do: Charlie Frago, Tampa Bay Times Staff Writer, St. Pete officials ask Walmart to reconsider Midtown closing.

There is no one better at operating retail in stressed communities than Wal-Mart. If they cannot make Tangerine Plaza work, then it is unlikely that without serious intervention from the City, anyone can.

All of this leads me back to Robert Trigaux question, "Does anybody really know what's going on here?"

And, the answer is a resounding no.

Local officials are asking why Wal-Mart did not come to them about the store.

I spent over ten years with a major retailer and when stores get in trouble, they just do not go to local governments, air their dirty laundry and ask for help. That is just not how it works.

The City just coughed up $2.2 Million to bail out the shopping center, and one would think when you make that kind of investment you would be following up to see how the tenants are doing.

This development, Tangerine Plaza is a key to the continued redevelopment of South St. Pete.

Here again, the Kriseman administration has failed the residents of south St. Pete.

The amount of effort put in by previous administrations to get this site developed and the amount of money recently invested to bail the project out warrant continued hands-on involvement with every business in the area.

This problem is a classic example of throwing public money at a difficult project and running back your safe office in City Hall to focus on the shiny stuff like the Pier and the Ferry.

This property needs a manager that understands the retail business and can work with senior management at these retail organizations.

The hire/appointment should not be ethnicity based to appease the community but someone with real qualifications regardless of their race.

It is unlikely that Wal-Mart will change their plans, but even if they did it would require some significant and ongoing investment of money and effort on the City's' part to keep things afloat. Bringing in another grocery retailer is an option, but here again; the City must be prepared to be an ongoing partner and not just a property owner.

Finally, it would be interesting to know how the Wal-Mart Representative Monesia Brown felt after Darrel Rouson's comments as reported in the Tampa Bay Times: “I felt like taking everything off the shelf and throwing it on the floor,” Rouson said at a late-afternoon meeting at his downtown St. Petersburg office with Wal-Mart representatives and local officials.

Maybe the problem is more obvious than one would think.