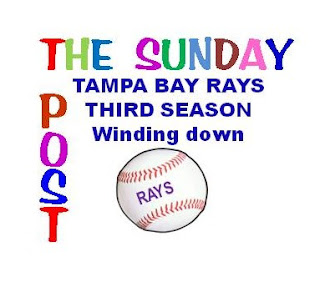 Are the Rays are having some trouble getting a serious stadium conversation started?

I have defined the Tampa Bay Baseball "Third Season" as that time between the last world series game and the start of the spring training media hype or roughly late October to late February.

This is the time when the Rays usually beat the drum loudly complaining about poor attendance blaming it on Tropicana Field and lack luster appreciation of the sport by the local population.

In the past the Third Season" has included games between Tampa, Hillsborough County, St. Petersburg, Pinellas County and this year the City of Oldsmar and a small skirmish with Derby Lane.

There has been little of the normal posturing and hype associated previous "Third Seasons." While one could conclude that there is a lot going on in the background, the silence is deafening.

Mark Topkin, Tampa Bay Times staff writer reports some interesting comments from Baseball Commissioner Rob Manfred in, Manfred: There has to be "end game" in Rays stadium bid or ...

Manfred said, "Ultimately, there has to be an end game. If in fact, there's not a site or there's not a financial arrangement that's viable and we become convinced of that, our rules allow for the possibility of relocation."

Every since Jeff Vinik made the statement about his downtown Tampa development "Baseball is not the best and highest use of the property" (paraphrase) interest seems to have waned across the Bay.

Smart money in Tampa has apparently heard Tampa's premier developer and current talk in the Legislature about limiting funding for sports stadiums has thrown a bit of cold Gator Aid on the new stadium site.

The clock is ticking.

With the dawn of 2017, the Rays have just ten years left on their lease agreement with the City of St. Petersburg. That may sound like a long time but when it comes to new stadiums, the time window from start to first pitch could consume most of that time.

Consider getting land accumulated, an actual agreement, arranging a controversial and complicated financing deal, a possible referendum, a plan for paying for infrastructure costs, and an electorate not real thrilled with public funds being diverted to sports franchise owners, the whole process spanning several major political races and elections while baseball interest in the Bay area continues to deteriorate.

How much of your money would you invest in a new stadium?

It could be the reason why we have not heard much during this "Third Season" is the Rays are having some trouble getting a serious conversation started.

It is starting to look like Mayor Kriseman may be correct about the Rays looking around and finding the Trop site is the best place after all. Maybe what they find is it is the ONLY place.

I have long said the real problem St. Petersburg faces with the Rays is not that they leave, but they will want to stay.

As the Commissioner said, "Ultimately, there has to be an end game. If in fact, there's not a site or there's not a financial arrangement that's viable and we become convinced of that, our rules allow for the possibility of relocation."

So far, not so good.