St. Petersburg needs another "Baker Plan" and a person who can implement it. 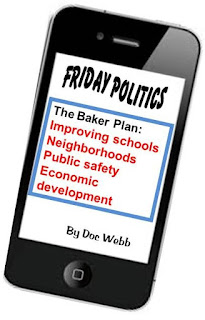 St. Petersburg has languished for eight years it is time to get a plan and leadership that can take the City into the next decade.

For those of you new to St. Petersburg, here is a bio of former St. Pete Mayor Rick Baker.

Wikipedia - Born in Chicago, Baker is married to wife Joyce.[1] While attending Florida State University, Baker was the President of Lambda Chi Alpha Fraternity. He also served as the school's senior class president and president of the Student Senate. Baker has a long] background in management and law. Baker received a BS in management, an MBA and Juris Doctor (honors) from Florida State University. He also studied comparative law for a semester abroad at University of Oxford. Baker has practiced corporate and business law for 20 years, serving as president of Fisher and Sauls, P.A., a St. Petersburg law firm.[2] Prior to his election as mayor, Baker served as the chairman of the St. Petersburg Chamber of Commerce.[2] He is also the author of Mangroves to Major League, a historical account of the development of the city of St. Petersburg.

Baker focused on these four key issues for the four years of his first term drawing the entire City organization into a tight focus on these core issues of public service and commitments. There was no doubt about where we were going as an organization.

It was truly amazing what an organization clearly focused could accomplish. There were measurable positive improvements in every area of the Baker Plan.

In 2005, Baker ran for reelection and won with 70% of the vote. From Tampa Bay Times By CARRIE JOHNSON and JON WILSON Published November 9, 2005 'A city united:' Baker cruises to re-election.

The major problem with the Kriseman administration is the complete lack of focus. There is no central theme, no anchor of ideas to guide the City's administration, no compass that the staff can look to for planning.

Kriseman's inability to provide leadership and focus have led the City into series jerks and fits with no clear direction for anything.

Rick Baker may or may not be the right person to lead St. Petersburg forward into the next decade but his concept of a simple clear stated course of direction that can focus budgets, efforts, plans and measure results is surely, what is needed.

Rick Baker has not made a decision yet about running for St. Pete Mayor this year, and I think his decision will be strongly influenced by who steps up to take the challenge.

If you love St. Pete, you only need to look around at the burgeoning office of the Mayor staffed with political cronies, the decline in south side schools, no effective plans for the problems that face the City, a midtown and south side that are only slightly better off thanks not to the Mayor but the tireless efforts of Steve Kornell and a staff with no direction seeking legal protection when they bring forth problems.

It is time for local business leaders, community leaders and others to look at their community role and maybe read one or both of Baker's books (The Seamless City: A Conservative Mayor's Approach to Urban Revitalization that Can Work Anywhere  and Mangroves to Major League: A Timeline of St. Petersburg, Florida and consider doing what he did: steeping out to make a difference.

St. Petersburg has languished for eight years it is time to get a plan and leadership that can take the City into the next decade.

Disclosures: I was a member of the Baker Administration for eight years.

Florida West Coast  Opinion by: E. Eugene Webb PhD Once again, the Manatee County Commission has shown its gross negligence in managing a...