John Morgan, "I may want to be your Governor" 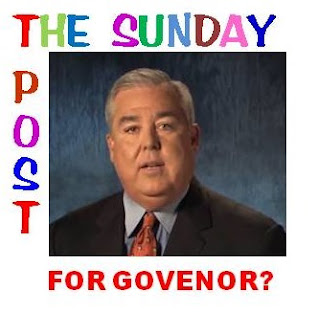 The draft Morgan effort caught the usually unflappable Morgan a bit off guard, but he is certainly not writing off the thought.


St. Petersburg Fl
Opinion by: E. Eugene Webb PhD
Author: In Search of Robin
Disclosure: We used the Morgan and Morgan law firm in an auto accident insurance settlement a few years ago.
Attorney John Morgan, the guy who smiles at you from all those billboards and comes into your living room with folksy advice and rock hard legal services may want to be your next governor.
The draft Morgan effort caught the usually unflappable Morgan a bit off guard, but he is certainly not writing off the thought.
"Since Monday, the outpouring of encouragement to run for governor has been overwhelming and unexpected," wrote Morgan, who has never held elective office. "It is either extremely flattering that so many people put such faith in me, or sad that people have so little faith in the typical politicians of both parties who are expected to seek the office."
But, he added, "Before I go down this road any further I need a lot of time to think about it. There are obvious drawbacks and hurdles," John Morgan.

Reaction was swift and more or less predictable. See: Tampa Bay Times, Adam Smith, Add Morgan to list of potential governors
Tampa Bay Times, Adam Smith, Buckhorn, Graham, Levine respond to John Morgan's possible gov campaign against them
You can see John Morgan's Bio at For the People.
In an initial social media and web site posting forthegovenor.com  requesting support and funds, quickly garnered 2000 responses, one of them mine.
There will be all the obvious comparisons to Trump outsider, rich, successful probably fewer comparisons to Rick Scott, who lead the outsider effort in Florida.
The interest in Morgan continues a trend toward less emphasis on the political class, which has been in charge of government for far too many decades.
Just the thought of someone with Morgan's reputation of fighting for the little guy, and name recognition throws shivers into the Democratic establishment. Who would consider a run against Morgan in the democratic primary?
Bob Buckhorn?     Seriously?
Same on the Republican side. Who would the Republicans want to put up against Morgan?
Even better question what Republican would want to risk their career running against Morgan?
Don't look for a decision soon there is great value in letting this effort percolate through the Republican and Democratic establishment.
For now, Morgan is "thinking" about it, and you can follow the fun on Twitter at https://twitter.com/forthegovernor.
Morgan and his firm were once My Lawyer, and I have no qualms about him being My Governor.
e-mail Doc at mail to:dr.gwebb@yahoo.com send me a Facebook (Gene Webb) Friend Request, and be sure to Like of Share on Facebook.
See Doc’s Photo Gallery at Bay Post Photos