Oldsmar throws the first pitch in the Rays “Third Season” 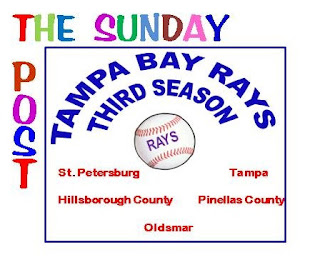 For the last few years, the Tampa Bay Rays have been playing four seasons in St. Petersburg.

There is spring training, the regular season, the fall politics season and the winter negotiating season.

You are probably familiar with spring training and the regular season, the fall political season and the winter negotiating season maybe not so much.

The fall political season is that period where the St. Pete City Council, the Pinellas County Commission, Tampa and Hillsborough County try to get their various stadium proposals, positions, money and ducks in a row.

Typically, there are a lot of pitches, mostly softballs, a few strikes and a lot of outs.
However, in the 2016 third season Oldsmar Mayor Doug Bevis has thrown, the first pitch see the Tampa Bay Times article by Christopher O'Donnell Rays stadium in Oldsmar? The mayor sure thinks so

The third season will actually kick off later this month.

You can look for some preliminary public talks with the St. Pete Mayor and someone from the Rays probably in a month or so. The Mayor's office would like everyone to think some talks have been ongoing, but I think that is not likely.

St. Pete City Council may weigh in if they can get their collective heads above the rising sewage crisis.

Most curious has been the lack of any serious major-league baseball interest from Hillsborough County or Mayor Kriseman's buddy Tampa Mayor Bob Buckhorn.

Since Jeff Vinik indicated that baseball was not the "best and highest" use of his downtown development property a major-league baseball stadium has not been a hot topic across the Bay.

The Rays continuing poor performance at the box office, last in attendance for five years in a row, has deep-pocketed investors giving a bit more credence to Mr. Vinik's views.

Tampa Mayor Bob Buckhorn has a raft of problems on his own plate and a protracted battle over baseball may just be one distraction he would like to avoid.

The pitch is financing from both Counties.

Look for some high and outside pitches from across the Bay just to keep things interesting.

Unless a really deep pocked angel shows up or MLB becomes so disgusted with St. Pete and Pinellas County, they are willing to pony up some serious money and/or concessions, the pickens for a new stadium in Hillsborough may be a bit slim.

Just given the Rays trepidation and speed at which baseball approaches problems like the Ray's stadium dilemma, do not look for much to happen. It could be January before any substantive talks result in a new proposal.

Meanwhile, Oldsmar is the only City aggressively pushing the stadium issue and St. Petersburg appears to hope for a win by default.