It is now a three-party race for President 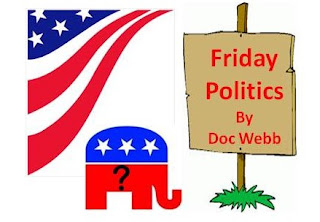 Trump’s support may be wider and deeper than the Party, and the Pollsters believe.

St. Petersburg Fl
Opinion by: E. Eugene Webb PhD
Author: In Search of Robin
The Republican basket of “Easily Offendables” has finally got the ammunition to do what they have wanted to do all along. In a fit of self-righteousness, the Republican establishment led by Paul Ryan and the party stalwart have bailed out on the Party’s presidential nominee.
This is the crowd with the 12% favor ability rating.
They will focus on the down ballot races or more appropriately put they are trying desperately to hold on to their jobs.
Makes you wonder if it were to come to light that you had made these or similar "offensive" comments would these fine public servants still represent you?
Could you get a meeting with them?
Would they abandon you?
Can you count on them?
Or are they really better than you are?
One thing you can be sure of, they would take your campaign contributions. 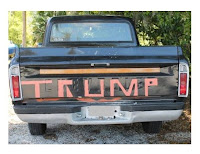 Trump’s support may be wider and deeper than the Party, and the Pollsters believe.
Out in the rural parts of Florida the feelings for Trump are strong. I suspect that is true all over the country.
I get several robo calls a day many are surveys, but I’ll bet the guy that owns this pickup truck has never gotten a polling call.

The message on the rear window is harsh, but it reflects a feeling
where the polling may not reach.
How big is this group? We won’t really know until November 9, 2016.
I for one am more offended by the gutless, elitist, Republican political establishment than any of Trump’s comments. Their reaction to controversy run, hide, cover your a**.
I will be voting for the Republican at the top of the ballot, but the RNC candidates down the ballot – no chance.
I can handle some past brash language. What I cannot stomach is being talked down to by bunch of political elitists whose only claim to fame is they never got caught.
e-mail Doc at mail to:dr.gwebb@yahoo.com send me a Facebook (Gene Webb) Friend Request, and be sure to Like of Share on Facebook.
See Doc’s Photo Gallery at Bay Post Photos
Disclosures:Contributor: Bob Gualtieri for Pinellas County Sheriff,  Patrick Murphy for US Senate, Charlie Crist for Congress