Does the Kriseman administration have its head in the sand? 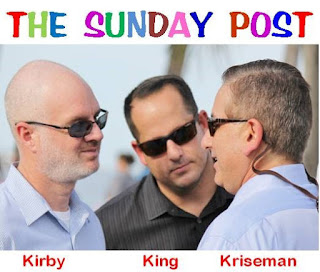 Does the Kriseman administration have its head in the sand?

Kriseman continues to pump out all the glitzy social media stuff while failing to assure his employees that they are safe from retaliation.

Things continue to spiral out of control in the Kriseman administration as another official from the Water Resources department goes public about fearing retaliation from the Mayor's office.

Steven Marshall manager of Energy and sustainability contacted the City HR Department to put his concern on the record.

The sewer issue may get a serious airing since City Council has hired a forensic auditor to look into the now infamous 2014 Brown and Caldwell report that predicted a sewage crisis if the Albert Whitted waste water plant was shut down.

The bigger question is can Kriseman, King and Kirby govern effectively amid an atmosphere of fear and uncertainty?

The Wastewater mess is all out in the open, but what about the drinking water, the Fire department, Parks and Recreation the Pier Project, the Police Department and their new building and the dozens of other City departments where things may be going wrong and people are afraid to come forward.

Kriseman and his office of the Mayor seem isolated and detached from the rest of the City organization.

Kriseman continues to pump out all the glitzy social media stuff while failing to attend critical council meetings and assuring his employees that they are safe from retaliation.

City Council almost did the right thing when they hired independent forensic auditor Laura Brock, but they opted to go to the cheap. Just $25,000 that is barely enough to crack open all the records the auditor will need to get to the bottom of all of this.

Too little money to get at the issues.

With St. Petersburg now fully into the "strong mayor" form of government with its political cronyism, retaliatory management style, secrecy and willingness to blame and pass the buck it should clear that those who represent the public need their own investigative arm to keep things to keep things in check.

An on the cheap forensic audit is not going to answer any questions, and a more robust effort should begin on the Pier before it gets completely out of control.

St. Pete has its first problematic strong Mayor. Making the situation worse the Mayor has surrounded himself with inexperienced political cronies that are more interested in the politics than the City.

When I was with the City, it always amazed me how quickly the management team saw through the real phonies on the team or in the administration.

Now when I ask my former contemporaries about the administration, even when I promise "no quotes" they simply roll their eyes and change the subject.

It is no surprise people fear for the jobs, and that may be just the atmosphere, the Mayor and his dream team wants to foster.