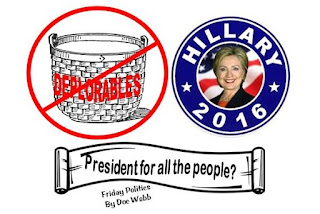 Hillary Clinton’s recent comments about the basket of deplorables have created a fire storm. Obviously fodder for the Trump campaign, the real question is did these statements represent a deep held view of the Democratic nominee about certain groups in our society.

First is the people who actually fall within the groups delineated by Clinton and second, those who may empathize with one of these groups.

In the first case, it is easy to understand those who would be offended. In the second group, the population may be significantly larger because as a society, we have become much more liberal in our thinking.

Some are passing this incident off as Clinton pandering to her high-roller  base, but I would offer a slightly different case given the events immediately following the “basket of deplorables” comments.

It is a reasonable assumption, based upon the Sunday incident; Clinton was already tired and possibly not feeling well.

When I am tired, exhausted or not feeling well I have a tendency to be a little short and simply say what I feel without a lot of forethought. Perhaps we got an inside look at how Hillary views those she would cast as deplorable.

Trump has been severely criticized for his early comments about Muslims and illegal immigrants, but his comments were directed at our ongoing security issues, while Clinton’s comments single out specific groups as somehow unfit for political consideration.

Last time I checked it was our diversity that makes us the country that we are and those wishing to lead us from the highest office in the land should be willing to accept us as we are.

Fitness for the presidency includes an appreciation for all of us.